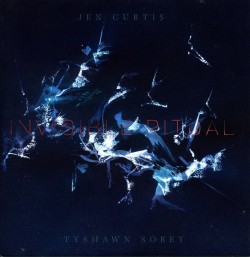 The following review is an excerpt from Something in the Air (September 2020) which can be read in its entirety here.

Just as innovation in jazz, notated and popular music rewrote precepts about harmony, melody, pitch and rhythm during the 20th century, so were the s about instruments’ interconnections remade. With even newer attitudes in the 21st century, pairing two instruments’ supposedly dissimilar timbres is no longer outrageous, but can lead to appealing sounds.

Consider for example, Invisible Ritual (Tundra Records TUN 014 newfocusrecordings.com) that joins Americans Jennifer Curtis (violin) and Tyshawn Sorey, who plays percussion and piano. Curtis’ background includes playing old-timey music and membership in the contemporary chamber group ICE. Sorey composes for ensembles such as ICE as well as gigging as a jazz drummer with the likes of Myra Melford. The pair stretch boundaries only slightly during expected chamber music violin-piano configurations here. But while there’s a near rococo feel when the pianist sticks to prudent and deliberate patterning and the fiddler sweetens textures to the quasi-baroque, other sequences such as Invisible Ritual III and Invisible Ritual V are invested with dynamic animation. A heavier touch encompassing key clip and clinks from the piano adds swing intimations further propelled by impetuous violin glissandi and, especially on the second tune, triple-stopping variations and col legno taps. Contrast is more markedly defined when percussion is involved. Starting with a folksy exposition, gong-like reverberations and arco string strokes add to the reflective mood. The same sort of savvy is brought to faster numbers. Kinetic steeplechases are propelled by chunky drum rumbles and cymbal echoes from Sorey as Curtis, jumping from strained squeaks to pizzicato plucks on the fiddle, references the heads as they create new distinctive melodies. There’s even a point on Invisible Ritual VIII where the blend threatens to create a Balkan-style dance rhythm. Versatility and cooperation is most obvious on Invisible Ritual IV, where Sorey’s beat stretching and ruffs complement Curtis’ dynamic moves back and forth from spiccato to arco, often during the same line. As he slaps cymbal and snares, she heads into hoedown territory and then turns to tough tremolo sweeps to face down the ferocious clip-chop percussion challenge.