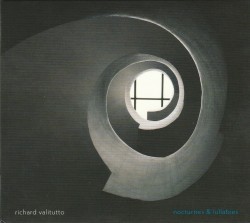 Contemporary keyboard exponent Richard Valitutto has released a timely, meditative new record that features seven premiere recordings of works by six composers. (The penultimate track on the album – Linda Catlin Smith's A Nocturne – was first recorded by Eve Egoyan in 2012.) each written within the last 35 years. Valitutto claims to have been “focused on cultivating a sort of pianistic ‘anti-virtuosity’... performing music that seems simple on the surface but in actuality affords a great many challenges.” The tracks are, generally, connected to the theme of night and its various dimensions: dream-haunting nocturnes and lullabies, uncertain of – or anachronistic in - their 21st century functions.

Admirable ranges of expression are displayed here through experimental modes of resonance. The disc’s chronology is well curated, moving through dark soundscapes to brighter moments of lucidity and repose. Immediately striking is Valitutto’s intimacy with each of these works, collected and considered from a specific time and place with fortitude and explorative zeal.

Amongst the many highlights of the disc is shadow (2013) by Rebecca Saunders, a study in so-called “acoustic shadows.” Valitutto relishes this music’s intensity and sculpture, urging a keen ear when listening to every last brilliant moment of the score.