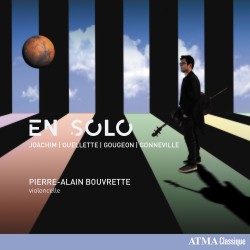 The following review is an excerpt from Editor's Corner (March 2020) which can be read in its entirety here.

I seem to be shedding instruments at every turn in this column. I’m down to one cello in the final entry, En Solo,featuring challenging works by Canadian composers very ably performed by Pierre-Alain Bouvrette (ATMA ACD24039 digital release atmaclassique.com). As an amateur cellist and avid collector of Canadian music, I welcome this addition to the catalogue, but I must admit a number of frustrations with this digital only release. I find the recording quality and performance very satisfactory, but the digital booklet leaves much to be desired. There is a biography of this young and accomplished cellist, who for more than a decade has played with the renowned Molinari Quartet, but about the composers there is no information except for their years of birth (and death in the case of one) or about the pieces. There are hyperlinks which in three cases lead to Canadian Music Centre biographies, and in the fourth to Michel Gonneville’s own French-only website. There is also a link to Gonneville’s program note, but no notes for the other works even on the CMC site. Frankly I have come to expect more from the otherwise excellent ATMA label.

The opening selection is Paean, a 1989 composition by Otto Joachim (1910-2010, two and half months shy of his 100th birthday!). I believe this is its first commercial recording, but fortunately I have in my collection a Radio Canada portrait disc devoted to the works of Joachim which includes a broadcast recording of the premiere in 1992 by the dedicatee Guy Fouquet. (I believe my photographer friend André Leduc and I were actually at that performance which took place during the Quinzaine du violoncelle in Montreal.) Thanks to the Radio Canada release I am able to tell you that in his program note Joachim says that “Paean is mainly a 12-tone work but I subconsciously integrated into the series a melodic pattern from a Tamil raga that I knew, thereby creating a haunting melisma. I added to those long sustained notes a rhythm based on the tabla heard in this very raga…” He added “One assumes that it is harder to find ideas at 80: this was not the case with Paean, which I wrote in a relatively short time.” Now that’s the kind of information and insight that I find helpful when listening to a contemporary work.

It’s a shame that we are left wanting with two of the other pieces, Antoine Ouellette’s Psaume, Op.5 which dates from 1982 and was revised in 2013, and Denis Gougeon’s Six Thèmes Solaires: Pluton from 1990, revised in 2014. These meagre details I was able to glean from the CMC catalogue of works, along with the information that Gougeon’s six themes are each scored for different instruments or instrumental combinations and take their names from planets (Pluton = Pluto); and I suppose that Ouellette’s title is self-explanatory. As mentioned, Gonneville’s website does provide a description, in French, and a translation of the German title Hinauf, dem Bach entlang. My understand of the French is “walking up along the brook” and there is a pun here on the name of Bach, which means brook in German. Gonneville says the piece takes some of its inspiration from Bach’s Solo Cello Suite No.5. Perhaps a bit ironically, it is Gougeon’s piece that is most reminiscent of Bach’s solo cello writing to my ear, not Gonneville’s. All that being said, this is still an important addition to the catalogue, and my collection, and it’s great to get to hear Bouvrette come into his own with this solo tour de force.