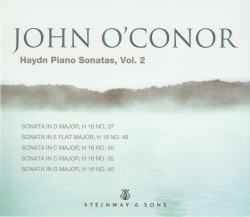 Celebrated for his characterful, refined interpretations of Beethoven, Schubert and – rather notably – John Ireland, Irish pianist John O’Conor has recently ventured into the 52 sonata-strong catalogue of Franz Joseph Haydn. The second in a projected series of such recordings with Steinway & Sons, this most recent release generally features late sonatas, varied in their formal structures yet irresistible in their innovations. O’Conor brings his customary warmth and tasteful approach to these classical essays: quirky, unexpected works at a good distance from the tautly balanced sonatas of Mozart and Schubert.

Haydn’s experiments in the genre offer a wide spectrum of musical personality. They brush boisterously with folk idioms of the 18th century, skewing phrasing and lyrical gesture in a ribald quest of mirth and merriment. Their slightly rough-and-tumble profile is not always captured by O’Conor. He appears to prize refined voicing and sculpted colour over a bit of pianistic fun. (Once in a while however, he does let himself loose amongst this music’s rustic urgings.) Despite the craft and polish, one detects a faint lack of familiarity with these works; figures and flourishes sound half-hearted, almost glossed over.

It is in the slow movements on this record where O’Conor sounds most at home. He brings a sincerity to Haydn’s melodic lines born of an intimate, semplice mode of expression. O’Conor’s ear for colouristic subtlety delivers harmonic poise and vocal nuance, begetting interpretations that would surely have made the old Austrian composer smile.