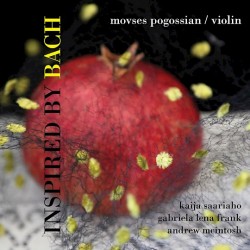 Links between past and present are central to another solo recital, as violinist Movses Pogossian follows up his 2017 release of the Bach Solo Sonatas and Partitas with Inspired by Bach (New Focus Recordings FCR206 newfocusrecordings.com), a CD that features three new works that he feels “follow in the inescapable shadow of Bach’s music for unaccompanied violin… connecting the listener with Bach and extending the legacy of the unaccompanied string works.” The connection with Bach may be a bit tenuous at times, but they certainly do fulfill the latter aim.

Kaija Saariaho’s four-movement Frises starts with the final D of the Bach D-Minor Chaconne, and each of the movements is focused on one historical ostinato-variation form – passacaglia or chaconne, for instance. In a concert setting, prepared sound materials are triggered by the soloist during the performance, together with real-time processing of the violin sound. Not here, though: Pogossian recorded the violin part alone, with Jean-Baptiste Barrière adding the electronics afterwards. It’s a tough listen at times, but always engrossing.

The American composer and pianist Gabriela Lena Frank’s Suite Mestiza was inspired by South American Andean culture, in particular sights and sounds remembered from trips to Peru with her mother. Described as programmatic and colourful, the seven movements depict scenes and characters from the Andes region. It’s imaginative and wide-ranging writing that draws quite remarkable playing from Pogossian. You can watch his performance on YouTube.

The American composer and violinist Andrew McIntosh says that his seven-movement work was partly inspired by the idea of juxtaposing different, clearly defined but unconnected shapes and colours. Certainly his Shasta starts that way, a fast and bustling opening that recalls the bariolage passages in the Bach works, followed by a still, long-held single note. An unexpected addition is the scoring for eight wine glasses bowed by four performers; they make their most noticeable contribution in the final movement, giving the work a peaceful ending that sounds like gentle breathing

Whatever the technical or musical challenges, nothing seems to create problems for Pogossian, who is quite superb throughout a terrific CD.