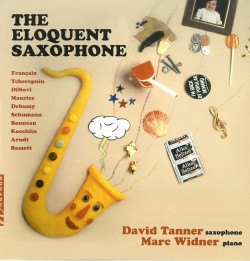 The following review is an excerpt from Editor's Corner (June/July/August 2018) which can be read in its entirety here.

Another Navona recording that arrived recently looked strangely familiar to me. The Eloquent Saxophone featuring Toronto (now Cobourg) saxophonist, professor and founding member of the pioneering band Lighthouse, David Tanner and pianist Marc Widner (nv6158 navonarecords.com). It’s a charming collection of mostly French repertoire from the early 20th century, but also including more recent works by American Leslie Bassett and Gene DiNovi – a saxophone ensemble piece achieved through overdubbing the various parts. The disc begins with another saxophone quartet, the aptly named Serenade comique by Jean Françaix. Although most of the works were written for the saxophone, there is an effective transcription of Debussy’s Syrinx (originally for solo flute) in a warm and thoughtful rendition. Widner is the perfect accompanist for this repertoire, whether playing original piano lines or, in the case of Paule Maurice’s Tableaux de Provence, subbing for an entire orchestra. Also of note is Charles Koechlin’s Etude No.VIII from a set of saxophone and piano studies that were not published until 1970, 20 years after the composer’s death. The credits tell us that the recordings were made in 1988 in Toronto, the multi-tracking at Axon Music Productions and the rest in Walter Hall. That’s when I figured out what was so familiar. I checked my file card catalog of LP recordings, and sure enough, I have the original vinyl version of this disc put out on Apparition Records. Even the cover art is the same. The brief performer bios have been updated nominally and the order of the tracks has been modified – it used to start with Syrinx – but with the exception of the program notes, unfortunately missing from the CD reissue, the recording is the same. It was a welcome addition to my collection three decades ago, and it is welcome again now.