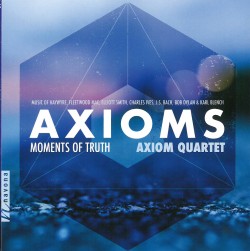 The following review is an excerpt from Strings Attached (June/July/August 2018) which can be read in its entirety here.

Axioms – Moments of Truth is the new CD from the Houston-based Axiom Quartet (Navona Records NV6151 navonarecords.com). Although there are short works ranging from Monteverdi through Bach, Ives, Billie Holiday and Fleetwood Mac to Bob Dylan, the driving creative force here is the composer Karl Blench, who not only made all the arrangements but also provided the short pieces that act as transitions between the named works; he also wrote the final title track.

Played without a break, it’s a fascinating program from an ensemble known for its mixing of traditional repertoire with transcriptions of music from a wide variety of popular genres. They’re clearly in their element here.