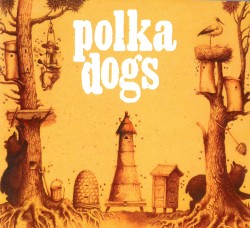 It’s been nearly 25 years since the category-defying Polka Dogs first burst onto the Toronto scene with their unique mashup of irresistible tunes, made all the more magical by their non-standard instrumentation of banjo, accordion, tuba, trombone and drums. Following their debut, the group soon became an integral part of the downtown entertainment scene, and they joyously oompah-ed, sang, blew and strummed their way into the nostalgia of post-80s hipsters.

On the venerable ensemble’s brand new offering, producer/banjoist/vocalist John Millard has once again composed the majority of the material, with additional contributions from Martha Ross and Tom Walsh. The talented Polka Dogs include Colin Couch on tuba, Tiina Kiik on accordion, Millard on banjo, Walsh on trombone and Ambrose Pottie on drums. This project has been beautifully recorded by Mike Haas in Toronto, and also by John Dinsmore and Andrew Penner at the Lincoln County Social Club.

The opener, Beardy Boy, has a joyous melody, snappy arrangement and clever, heart-warming lyrics. Of special note is tubaist Couch, who has superb intonation and articulation, and provides a steadfast yet pliant and swinging bass line throughout. Standout tracks include Peaceful and Quiet – rife with Brechtian nuances; The Bells, a feverish, tango-inspired tour-de-force for trombonist/vocalist Walsh; and also the sweetly nostalgic (and totally schmaltz-free) 1981. Millard’s masterful arrangement of the title track begins with an eerie brass drone and skeletal banjo riffs, until the group creeps in with intervals of fourths, embodying contemporary existential angst and a general disconnect from nature. This is a truly satisfying recording that captures vital and relevant musical artists in motion – engaging the future.