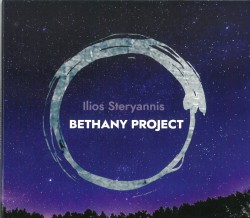 The following review is an excerpt from Editor's Corner (February 2018) which can be read in its entirety here.

The Bethany Project (iliosjazz.ca) is the brainchild of Toronto-based drummer and composer Ilios Steryannis, who spent his formative years in Bethany, ON “where it snowed a lot, we had a big old fashioned radio, and I loved to gaze up at the stars in the beautiful night sky…” There are 11 original tunes which each have a particular focus and personal link for Steryannis. From the opening The Group of 7 which turns out not to have anything to do with the art collective of that name, but rather refers to the Afro-Cuban groove in 7/4 time over which its melodies soar, through to the closing Soledad, inspired by the Gabriel García Márquez novel 100 Years of Solitude, there are many moods and tributes along the way. The one thing that is consistent throughout is the funky sensibility. And consummate musicianship from contributors Sundar Viswanathan (alto and soprano saxophones), Kenny Kirkwood (baritone sax), Connor Walsh (acoustic and electric bass), Joel Visentin (Hammond organ), Scott Neary (guitar) and Adam Hay and Larry Graves on sundry percussion. While primarily Latin in feel, other influences include John Coltrane, John Scofield and Joe Henderson, music of Steryannis’ Greek heritage and African beats from Kenya and Cameroon. Hard to sit still while this CD is on the player!