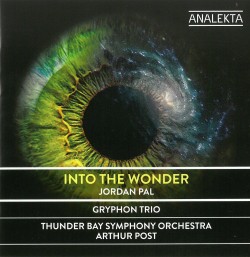 Jordan Pal : Into The Wonder - I. An Infinite Range

Jordan Pal : Into The Wonder - II. Birth and Death

The following review is an excerpt from Editor's Corner (December 2017/January 2018) which can be read in its entirety here.

I am pleased to note that this month we have reviews of four Analekta discs, and that they all feature contemporary (or at least 20th-century in the case of André Mathieu) composers. I point this out because although this Quebec label is highly respected for its releases, for the most part they stick to more conventionally classical repertoire, even though some of their artists are renowned for their commitment to contemporary music. The Gryphon Trio has been a major “exception to this rule.” The Gryphon’s 19-title discography includes half a dozen Analekta releases of contemporary music, so kudos to them. The most recent of these is Into the Wonder (AN 2 9521 analekta.com), on which they join the Thunder Bay Symphony Orchestra under the direction of Arthur Post to perform the music of Jordan Pal. Described by Ludwig van Toronto as “the country’s current it-boy composer,” at 34, Pal is currently the RBC affiliate composer of the Toronto Symphony and his music has been performed by every significant orchestra across Canada.

Starling – Triple concerto for violin, cello, piano and orchestra was commissioned by the Gryphon Trio and the Thunder Bay Symphony in 2013. It is a scintillating work in three movements, opening with an orchestral flourish that develops into a 15-minute flight, a “murmuration” with only brief moments of respite, mostly in the form of lyrical cadenzas from the solo trio. It is exhilarating how Pal sustains the momentum throughout. The Largo second movement begins in dark brass timbres that once again give way to gorgeously lyrical passages from the soloists, especially in the cello lines. But one word of caution, or at least a cautionary tale for me. Many years ago I discovered how close the sound of a cello can be to that of a saxophone when I first heard Kabalevsky’s Cello Concerto No.2. About midway through, the solo cello gives way to an alto saxophone cadenza so seamlessly that it takes several seconds for the ear to recognize what has just gone on. I had a similar experience when I first listened to Starling, which I did on small computer speakers. I was convinced I was hearing saxophone at several points in the recording and emailed Pal to ask if this was the case because I did not see any saxophonists credited in the list of orchestra members. He assured me that he had not included saxophone in the instrumentation and subsequent listening on proper speakers has confirmed this. That’s why I make a point of listening on my stereo system before passing judgement on discs – basic computer systems simply don’t provide accurate sound. The finale, Presto – Electric and Wild is simply that, a moto perpetuo once again reminiscent of a thousand starlings soaring and swirling together in the sky.

I think I will let the composer speak for himself about the title piece, also commissioned by the TBSO, which at half an hour comprises just under half of the disc. “Into the Wonder celebrates the creative will of our universe. Evoking birth and death, creation and destruction, universal interconnectedness and the rapture of love, this piece seeks to capture the mystery, awe and wonder of life. Nature’s own great works of art are reminders that we are a part of this magnificent range of possibilities, that we are part of something much greater. This symphony celebrates all that is beautiful.” Is this simply the naïve vision of a young man couched in slick orchestral finery? This is certainly not “new music” in the sense of Carter or Crumb, but it is genuinely attractive, well-crafted and brilliantly executed. Does it succeed in its aspirations? I welcome you to judge for yourselves.