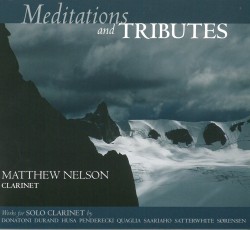 This selection of solo clarinet works, distinct in character and technical demand, stands as testimony to the fine effort and abilities of clarinettist Matthew Nelson. A who’s who of contemporary composers populates Meditations and Tributes, including Kaija Saariaho, Franco Donatoni, Karel Husa and Krzysztof Penderecki. Nelson’s technical assurance allows all their diverse musical ideas to reach the listener; here is a wealth of material for the unaccompanied instrument (much more than can be mentioned in a short review), masterfully played.

Out of the darkness, Saariaho’s Duft flutters into audible range to open the disc. The title translates as “scent.” I balk at kinaesthetic associations with music, though some may not. A coincidental segue between the final pitch of Flüchtig (the third Movement of Duft) and the first of Joël-François Durand’s La mesure des choses might mislead an inattentive listener. Durand’s style is very distinct from Saariaho’s, however, so the illusion doesn’t last. The former is active yet meditative, the latter full of intense, almost violent motion. Following Saariaho and Durand is Donatoni’s Clair, a two-movement work from 1980. Donatoni’s music is manic, even obsessive, in its manner of motivic evolution, but somehow lyrical and gorgeous. The other works presented are all either stand-alone pieces or triptychs, but Donatoni pairs two balanced movements, as he often did. Bent Sørensen’s Songs of the Decaying Garden is lovelier than the title (or the composer’s reputation for terrifyingly difficult music) might suggest. The haunting Prelude by Penderecki closes this excellent collection.

Nelson includes his own well-written liner notes, supplemented by three of the composers describing their own pieces: Durand, Bruce Quaglia, and Marc Satterwhite.