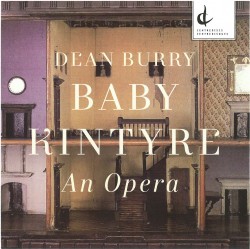 I remember the media frenzy surrounding the horrific event. In 2007, a home renovator discovered a mummified baby wrapped in a 1925 newspaper in the floorboards of an East Toronto home. Burry was so moved by the discovery, that he used the news details of the characters to create so appropriately emotional, strong and larger-than-life operatic characters.

Burry’s libretto weaves a spellbinding tale with splashes of slapstick-flavoured humour in this story set in both the 2007 renovator’s discovery, and the 1920s’ life in the house on Kintyre Ave. The vocal melodies are tonally contemporary yet accessible. Burry’s use of “Amazing Grace” and “By the Light of the Silvery Moon” add a popular music sentiment. The performances by all the singers are clear and colourful. Eileen Nash is especially outstanding in her performance and childlike vocal tuning of the ten-year-old Rita. The small orchestra, with super pianist John Hess, plays with abandon and colour. Snippets of newscasts, cell phones and other modern day tidbits complete the soundscape. The CBC Radio Metro Morning documentary Baby Kintyre – Part 1 & 2 is included after the opera, pushing the story back into the real world.

Dean Burry has written a clever, thought-provoking and solid opera that requires no visual set to keep the listener enthralled! Oh, the secrets that families hold.

Episode 1- I Once Was Lost:

Episode 2- How Sweet the Sound: