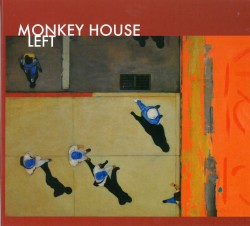 Scene-setting, storytelling and just old-fashioned lyric poetry – these are just some of the wonderful aspects of Left, the fifth album by Monkey House, Don Breithaupt’s iconic Toronto band since 1992. The musician, keyboardist and vocalist has lavished all that and more on each of the 11 songs that he has written either alone or with celebrated partners including Jay Graydon and Marc Jordan. Celebrity appeal has its commercial benefits, but in this case a large measure of the success is owed to Don Breithaupt, who demonstrates not simply a keen musical sensibility, but a glorious turn of phrase and a unique sense of the dramatic. None of that would matter had it not been for the most impressive performances by the members of Monkey House.

You would expect nothing less of drummer Mark Kelso, bassist Pat Kilbride and guitarist Justin Abedin. Each of the core members of the band – as well as the guest musicians – reveals the composer’s intentions most enthrallingly giving new meaning to the term “musicianship.” Good to Live and It’s Already Dark in New York are good examples of the expressive range of emotions that these musicians bring to the program. Breithaupt leads from the front and his vocal evocations are splendidly balanced by the rhythmic vitality of his musicality, expressed on a variety of keyboards. His performance shows itself most clearly in the beautiful The Art of Starting Over, which affords perfectly judged musical and textural contrast, together with a dance-like finale.

It Works For Me