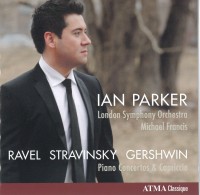 This is Vancouver born, New York City based, Ian Parker’s debut CD, and what an auspicious debut it is! For starters, the CD was recorded at Abbey Road Studios, “the most famous recording studio in the world,” Parker notes with delight in a YouTube clip taken during the recording session. Secondly, Parker records the Ravel and Gershwin concerti, in G major and F respectively, and the Stravinsky Capriccio, with the acclaimed London Symphony Orchestra, under Michael Francis.

No stranger to accolades and awards himself, Parker, who hails from piano-playing Parker pedigree – he is a younger cousin to concert pianists (and brothers) Jon Kimura and Jamie Parker – made his Lincoln Center recital debut in 2004 and his debut as a conductor with the Windsor Symphony in its 2008/2009 season. During his studies at Juilliard (where he completed both Bachelor and Master of Music degrees), he was awarded the Canada Council for the Arts’ Sylva Gelber Career Grant, given annually to the “most talented Canadian artist.”

Parker tackles this 20th century repertoire with gusto, sensitivity and intelligence. The featured works were written between 1925 and 1931; all three composers knew and admired each other, their works being influenced by one another’s compositional styles to varying degrees. In Parker’s masterful hands, the Ravel, with its hints of jazz, sparkles and shimmers in all the right places, the Stravinsky is playful, charming and spirited, and the Gershwin, sophisticated in its use of French melodic and harmonic idiom, is a complex, jazz-infused joy.

Clearly, Parker is in his element here, and judging by the smile on his face and the enthusiasm in his voice in that YouTube clip, he enjoyed every minute of the experience. It comes through in his playing. In all three pieces, Parker demonstrates controlled, restrained phrasing, a refined sensibility and a precise, uncluttered technique.