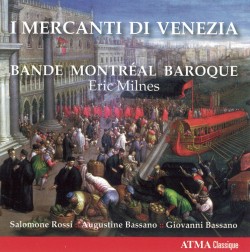 Venice’s ghetto was designed to isolate Jews but unintentionally allowed Jews from all over Europe and the Middle East to live together and share their expertise and pride in their heritage; they created renaissance masterpieces.

Salamone Rossi, from that very ghetto, makes his mark here with a setting of the eternally-popular Eyn Keloheinu - if ever one wanted this hymn scored for renaissance woodwind and organ this would be the definitive item. Several of Rossi’s sonatas grace this recording and yet perhaps most impressive of all is his Sonata in dialogo detta la Viena. The cornetto makes its clear mellow presence felt via Matthew Jennejohn’s sensual interpretations of Rossi’s demanding writing.

Next, a composer and virtuoso cornetto player who also lived in the Venice ghetto: Giovanni Bassano, Rossi’s contemporary and neighbour, pioneered baroque improvisation as early as 1585. Margaret Little (Recercata Ottava, treble viol), Francis Colpron (Recercare Terza, recorder) and Jennejohn (Dimunitions sur Ung Gay Bergier, cornetto) more than meet the challenges set by this virtuoso improviser. Enjoy, too, the last two selections on the CD from Bassano’s 1591 Variations which bring together the full plethora of instruments listed above.

Rossi and Bassano were highly respected by Venetians in or out of the ghetto. This recording opens the door to their music - ajar but open enough for us to want more.

Lastly, music composed by Jews in a country where they were not supposed to exist but did so by concealing their identity. From 1550 to 1604, Augustine Bassano, very probably Jewish, served as a Musician in Ordinary for Recorders at four very different English courts. His Pavan & Galliard, enhanced by some fine recorder playing, stand with anything native English composers could offer.