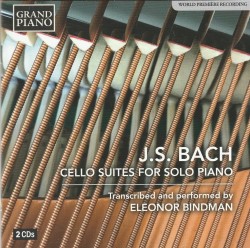 For New York-based pianist Eleonor Bindman, Bach became her beacon at age ten, when she snuck a peek at her teacher’s notebook and saw the words “plays Bach well” under her name. Since then she’s never wavered.

Bindman’s intimate connection to, and study of, the music of J.S. Bach deepened over the decades. This lead to her 2018, one-piano/four-hands, transcription of all six Brandenburg Concertos, followed by several other Bach transcription projects, ultimately resulting in this transcription and recording of the six unaccompanied Cello Suites BWV 1007-1012.

Interestingly, in addition to the piano, the Cello Suites have been transcribed for numerous solo instruments including, among others, the mandolin, marimba, classical guitar, electric bass, flute, saxophone, trombone, tuba and ukulele. I can’t vouch for how successful each of these efforts has been, but I reckon it’s not an easy task, regardless of the instrument. (Even Robert Schumann, who wrote a piano accompaniment for all six Suites, had his arrangements rejected by his publisher.)

I can, however, vouch for the success of Bindman’s piano transcription, which is superb, embodying the true essence of the Suites, something she aspired to. As she states in her excellent liner notes, the “Suites didn’t need any improvement.”

Bindman maintains the majesty of Bach’s music, via both her transcription and her convincing command of the keyboard. Whether you’re a purist or a Bach devotee, this satisfying 2-CD set is worthy of a thoughtful listen.