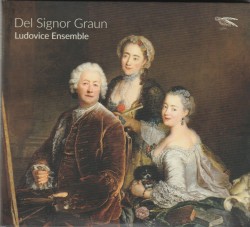 Music at the court of Frederick the Great usually conjures up images of JJ Quantz and CPE Bach – or even Frederick himself. That image is now under challenge due to this recording of music by the brothers Graun, who occupied key positions during Frederick’s rule.

Then there is the other Graun, Johann Gottlieb. The Adagio from his Sonata in D demonstrates how much freedom this composer allowed his flutist, what with this movement’s forthright and almost chirpy playing, something enhanced in the following Allegro ma non molto. Joana Amorim obviously appreciates this tuneful opportunity, although it should not be allowed to overshadow Fernando Miguel Jalôto’s harpsichord playing.

Contrasted as they are in their approaches, these two composers’ works are rarely performed these days. It is time for them to be restored to a more popular status.