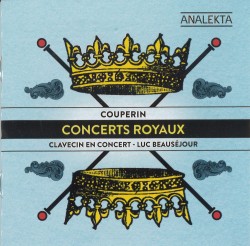 Louis XIV summoned Couperin to play for him nearly every Sunday; the works performed in 1714-1715 were titled Concerts Royaux and were published in 1722. Couperin left the instrumentation of the concerts to the musicians’ discretion, a traditional Renaissance practice, even if the movements take the form of the traditional French baroque suite, no doubt under the Sun King’s influence.

From the first concert, the flute, oboe and bassoon lend a different quality to what would otherwise have been strings-dominated pieces. The woodwind instruments are prominent in the prélude and sarabande, where they impart a melancholy quality, and in the gavotte and gigue where the result is a more rustic feel.

In the second concert, the strings make themselves felt much more, notably in the gentle quality of the air tendre. The last movement, échos, restores the balance in favour of the woodwind, in a dignified baroque style.

The third and fourth concerts royaux combine some lively performances for oboe, bassoon and flute, most notably in the musette of the third. The name allemande for the second movement of the third concert belies its liveliness, even if sarabande grave is an entirely appropriate name for the fourth movement.

And then the fourth concert, with yet another allemande not living up to its sombre reputation. In fact, both the courantes which immediately follow, and the rigaudon and forlane en roundeau make this the most exuberant of the concerts royaux.

All in all, an enjoyable collection of Couperin’s music for his royal master.