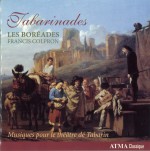 Tabarin was the stage name of Jean Salomon. Born in 1584, he and Antoine and Philippe Girard set up an open-air theatre in Place Dauphine, Paris. Lively shows put Parisians of all classes in good humour, promoting the sale of Tabarin’s range of quack medicines.

Music accompanied the sketches; violins and bass viol are depicted in illustrations. The comparison with commedia dell’arte is too tempting for Director Colpron, who adds the latter’s recorders, lute and guitar.

From the start, this anthology (27 tracks in one hour!) features the liveliness of the French renaissance dance tune and many tracks are very familiar to early music lovers; track 2 Les Bouffons is a case in point, although one of the “outdoor” instruments of the period (crumhorn, rauschpfeife) would perhaps have made for an even livelier performance.

Several pieces are taken from more courtly circles, ballets being an obvious example. In these cases, woodwinds liven up what might have been rather subdued string pieces.

The selection is varied, as a motet and a stately pavan find their way onto a CD of essentially French secular and theatrical music. None of this should distract the listener from an hour of highly enjoyable playing, none more so than the recorder-playing of Francis Colpron (listen to the stately quality of Da bei rami scendea). His direction brings as many as 14 early musicians together, sometimes 11 on one track - a veritable crowd for early music enthusiasts!

And one man did come to be deeply influenced by Tabarin: real name Jean-Baptise Poquelin, stage-name Molière.