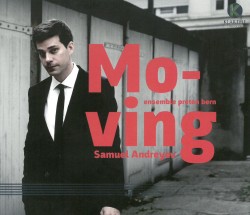 Paris-based Canadian composer Samuel Andreyev is deeply influenced by the plastic arts; he describes the first work on this disc, the Marcel Duchamp-inspired La Pendule de Profil, in terms of cubism, and his pieces tend toward an object-like quality. A good analog for the entire decade of work represented here, however, might be abstract impressionism. The impressionists placed the immediacy of perception above all else, carefully modulating light and colour to reproduce the experience of motion and time. The abstract impressionists took it further, distilling the object until only motion and colour remained. Andreyev, too, reduces musical perception to its elementary components, exploiting attack and especially timbre for their visceral, immediate impressions.

Where the abstract impressionism analogy fails, however, is in Andreyev’s meticulous structural clarity. An abstract impressionist painting overwhelms with its chaotic density. Andreyev’s music, although saturated with chromaticism, is not spatially dense, and as a result the listener perceives the music as both weighty but translucent, ordered but atemporal.

The miracle material that enables this remarkable paradox is ensemble proton bern itself; the symbiosis between composer and the musicians is palpable throughout. As rare instrument specialists, the Swiss ensemble gives free rein to Andreyev’s timbral explorations. The best examples are PLP, which features the Lupophon, a bass oboe with a fibrous, tenor saxophone-like sound, and Bern Trio, an ethereal gossamer fog for quartertone-tuned harp, viola, and oboe d’amore. A moving disc in both senses of the word.