In conversation with Tina Pearson

November 24 2017 will mark one year since the passing of Pauline Oliveros, a beautiful soul who brought to the world the practice of what she called Deep Listening.

To mark this occasion, there will be an event on November 28 at Array Space titled “Gratitude Listening for Pauline Oliveros” for people to gather to listen and sound in gratitude for what Pauline offered.

I spoke recently with Tina Pearson who has had a personal connection with Pauline since the late 1970s, and whose inspiration it was to have this event. Pearson was active in the new music community in Toronto during the 1970s and 80s, as a performer with the New Music Cooperative, a collaborator with TIDE (Toronto Independent Dance Enterprise) among others, and as the editor of Musicworks. Currently living in Victoria, Pearson was here this past summer as composer in residence with Contact Contemporary Music, offering an intensive workshop on Deep Listening at the Canadian Music Centre as well as a community-based Deep Listening workshop that I organized. She also facilitated the creation of a new work titled Root, Blood, Fractal, Breath for the Contact Ensemble performed at Allan Gardens. Pearson is a Deep Listening Certificate holder.

I first heard of Pauline through Jim Tenney (who taught composition at York University from 1976 to 2000), but met her in person when she came to the Music Gallery in November of 1979, where she was invited to present her Sonic Meditations. Experiencing her practice was quite powerful and validating. Suddenly the world opened up. Pauline seemed untethered from the masculine contexts of contemporary Western European art music and jazz-based free improvisation. She was a brilliant, strong, compassionate and attentive woman presenting an opportunity to everyone to listen in a complete and deep way. a

One of the remarkable things about Pauline was that she could be in the same moment so absolutely connecting personally as well as globally.

During her visit, I recorded and transcribed the interview that Andrew Timar conducted with Pauline for Musicworks. In those days [when I transcribed] I transcribed everything – every pause, nuance and emphasis. Listening so deeply to her voice and her expression while transcribing that interview was quite significant and I think some resonance of that stayed with me.

Afterwards, I kept in touch with her. Pauline was incredibly encouraging and generous with her time and support, especially of women. I started working with her Sonic Meditations, and incorporated her ideas about listening and attention in collaborations with the New Music Cooperative, with TIDE and in a project with David Mott titled Oxygen Tonic. I also started teaching Sound Studies at OCAD in 1983, and used the Sonic Meditations in those classes each year. Looking back now, I’m aware that there was an opening up in the thinking that many of us had about our approach to music which were in part influenced by Pauline’s ideas of embodied listening as performers and creators.

I was already considering the separation between audience and performer in concert music, for example, so one of the welcome revelations, among many, about Pauline’s approach was her absolute commitment to taking into account the experience of everyone: the witnesses, the audience, the participants, and the performers.” 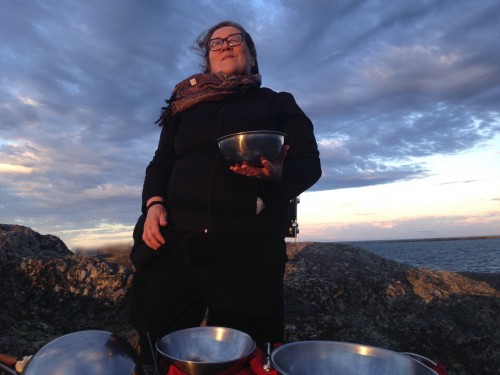 I then asked Tina to relate these earlier experiences to her recent experiences in Toronto this past summer facilitating Deep Listening Workshops:

Facilitating the Deep Listening intensives this summer was heartening. The participants were very open and able to quickly understand and take in this practice. The capacity for listening was there, and as Pauline believed would happen it is continually growing and deepening: The more listening there is, the more listening there will be.

I then asked her to say more about the focus and intention for the upcoming “Gratitude Listening for Pauline Oliveros” event happening on November 28 at Array Space:

The idea for this free event is to acknowledge the one-year anniversary of Pauline’s passing and to give gratitude to her. The quality, depth and acuity of Pauline’s sensibility about listening is rare. There’s nobody else who has embodied a listening practice like she has. Her courageous approach to listening and attention, and letting that guide where one goes and how one approaches life and one’s work, is something that’s so essential, and quite a beacon. The deep compassion that comes when one is attending to listening is important right now – the notion that listening can be a response to anything.

There will be a performance by several local performers of Pauline Oliveros’ work Arctic Air, which includes the text The Earth Worm Also Sings, written originally for the 1992 Glenn Gould Technology and Music Symposium held in Toronto. In addition, everyone will be able to participate in two of her Sonic Meditations, and there will be an opportunity for people to speak about their memories and Pauline’s impact. And of course, everyone is welcome.