“In hearing, the ears take in all the sound waves and particles and deliver them to the audio cortex where the listening takes place. We cannot turn off our ears – the ears are always taking in sound information – but we can turn off our listening. I feel that listening is the basis of creativity and culture. How you’re listening is how you develop a culture and how a community of people listens is what creates their culture.” 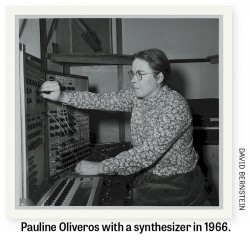 I first experienced American composer, electronic music pioneer and Deep Listener extraordinaire Pauline Oliveros at a concert she gave at the original Music Gallery sometime in the late 1970s. What I experienced was a revolution in the making that I had difficulty making sense of at the time. I had heard about Oliveros, in part through interviews with her in Musicworks magazine and also in Casey Sokol’s improvisation class at York University. I was anticipating a usual event – an audience sit-down-in-your-chair-and-be-quiet experience. But no, that’s definitely not what happened. The first piece, Tuning Meditation, was created by everyone lying on the floor with our heads in the centre, following these simple instructions: On breath one, make a tone that you are hearing inside yourself. On breath two, match a tone you are hearing in the room. Repeat this sequence until the ending occurs. No doubt many of you reading this have also participated in this piece as it is one of her most well-known and loved Sonic Meditations. It is a way of cultivating listening presence and awareness, both focal and global.

The second piece on the program was Extreme Slow Walk. The task was to listen while walking extremely slowly. I remember Pauline teaching us how to walk – to pay attention to each and every micro movement required just to take a step. The group walked in a circle for at least 40 minutes and, if my memory is correct, we only made one rotation around the room. However, it is what I experienced during that walk that has stayed with me all these years. At one point, it was as if a veil had been lifted and something inside of me expanded. The tension in my body dropped away. And despite the fact that my mind was questioning whether or not this was really a proper concert, the experience itself communicated the truth that something more profound was occurring at another level within me.

In the vast outpouring of tributes on social media in these last few days after Pauline’s passing, it was this quote from 1975 that spoke to my experience. When asked about the musical idea for Rose Mountain Slow Runner, Pauline said: “Well I haven’t been working with musical ideas for a while, but I’ve been working on my consciousness, on my mode of consciousness, and the result of the mode is the music.”

And that is indeed what has evolved throughout her career. She has created a legacy that has profoundly altered the awareness and musical practices of so many people worldwide. For myself as a young student at the time of that initial encounter, it began a process of questioning the way things are defined in music. And as I look back on the many experiences I have had with her over the years, each one of these memories marks a significant moment of learning, of expanding and of questioning assumptions. This is the gift of the expanded listening process she has brought to the world. I return again to her definition of Deep Listening: “listening in every possible way to everything possible to hear no matter what one is doing.”

In closing, I would like to recount two short stories from my own personal encounters with Pauline. The first took place during one of her visits to Toronto, sometime in the 1990s. With a small group in a forest close to Gayle Young’s home in Grimsby, Pauline led us in a few different approaches to vocal soundmaking. After we concluded, she said: “It’s really important for the trees that we do this, that we communicate with them.” The second incident took place close to her home in Kingston, NY. I was visiting her and wanted to go on an excursion to a local cave to do some soundmaking. Before we even got to the cave, her instructions were to start listening as we walked along the path, to become aware of all the other beings living in the fields and skies above, to listen to their presence and become as non-disruptive as possible. We continued in this mode after arriving at the cave, and only towards the end of our stay did we add our own soundmaking as participants in the larger field of sound around us.

Her gift to the world is so vast that it is almost impossible to sum it up in words. She affected and influenced so many because she herself treated each encounter as an opportunity to witness and be fully present.