While the focus in this magazine is typically on the musicians, venues, and institutions that comprise our shared musical community, it seemed like the time was ripe to focus on something a bit different: master builders who create exceptional instruments, beloved by players and audiences alike.

This month, I interviewed two notable Ontario guitar luthiers: Michael Sankey and Linda Manzer. Sankey – whose business, Sankey Guitars, is based in Ottawa – builds forward-thinking instruments, with an emphasis on ergonomic shapes, unique wood, and cutting-edge design. Manzer, based in Toronto, has long been a world-renowned guitar maker; her instruments can be heard in the hands of luminaries such as Pat Metheny, Julian Lage and Bruce Cockburn.

In my interview with Manzer and Sankey below, we discuss the effects of the pandemic on their practices, their exciting upcoming projects (including a new Manzer guitar for Metheny), and their hopes for the post-pandemic future.

WN: In March of last year, when the pandemic first broke and quarantine protocols began, how were your operations affected? How have the ongoing workplace COVID protocols affected the way that you do business?

LM: When the pandemic broke last March, I was actually visiting a guitar-maker friend (Steve Grimes) in Hawaii to celebrate his 1000th guitar. I returned about a week before Canadian travel restrictions were being seriously put in place. The reality of what was happening in the world was just settling in. Travelling was pretty wild. The morning I arrived home I had what I thought was a really bad cold, so in an abundance of caution I put myself in a self-imposed quarantine for about a month and a half while I recovered. I’ll never know for sure if it was COVID or not. I tested negative but it was early testing days and I had all the signs.

I have a shop in Toronto but also in Almonte, Ontario, which is where I do the bulk of my work these days. I completely stopped working for about two-plus months. Every working musician I know suddenly lost their jobs and suddenly stopped touring, and it was pretty shocking and devastating for them. There was no end in sight and as time marched on it became obvious things weren’t going to change anytime soon and they had to make huge adjustments. I was quite sure I would never get an order for another guitar. Then, about four months in, that flipped on its head and I suddenly got a flurry of guitar orders.

MS: COVID hit me personally and professionally at the same time. One of the main avenues for marketing and selling my instruments is to display and present them at musical-instrument trade shows around the world. And one of my favourite things to do is travel to interesting cities and connect with the people there who love the art of the guitar. I had a few of those planned, and of course with the travel bans (not to mention bans on gatherings) those shows had to be cancelled, perhaps never to return.

It could have been worse, though. My workshop is in my home, so with nowhere to go I could devote extra time to building guitars. I did run into a few issues with suppliers having difficulty fulfilling my orders for parts and sometimes shipping instruments internationally took a lot longer than expected. But overwhelmingly, my clients have accepted and understood when my delivery timelines had to be extended.

Contrary to initial expectations at the outset of quarantine in March 2020, large instrument companies such as Fender, Taylor, Martin and others experienced a major boom in sales during much of last year. This boom, however, is largely attributed to a surge in casual hobbyist musicians buying low- and mid-price instruments. As a luthier who makes specialized, pro-level instruments, how has the pandemic affected your sales?

MS: I don’t have the volume or the consistency of output to be able to draw such precise conclusions as the big companies, but I also felt a substantial boost in demand at the beginning of the pandemic. It may have tapered down to “business as usual” by now, but, given the rather long lead time it takes for me to build guitars, I get to keep riding this wave longer than them. Many of the guitar makers I chat with have noticed the same thing. I suppose a lot of folks have found that working from home gives them more free time to do the things they want to do, like play guitar!

LM: The first few months I got no inquiries at all, and then suddenly I was flooded with orders. I’m now booked a full year in advance. I’ll be 100% honest: I was actually starting to think of other projects I’ve been putting off for years and looking forward to having the time to work on them, but that evaporated.

How would you describe the target market for your instruments?

LM: I build for guitar players who know what they want in an instrument and feel an affinity to my building style. If someone comes to me for a guitar they usually know about my work and have a pretty good idea of what they will be getting acoustically. I try to make the best instrument I can to suit their playing style and their needs.

MS: Typically, people who are interested in my guitars are not just musicians, they are connoisseurs of the art of fine guitars. That’s the funny thing about guitars: they are not just a means of making music; they are expressions of identity, vessels for sonic exploration, visual inspiration and tactile satisfaction. So my instruments need to be highly functional, but also succeed at engaging the other senses of highly discriminating individuals. They are simultaneously art and tools for making art. 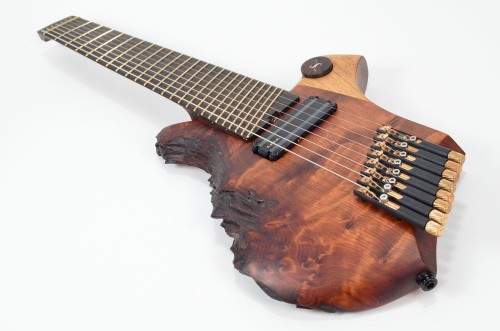 The relationship between specialized builders and professional musicians is often close. Of the musicians playing your instruments, what current (or upcoming) projects are you most excited about?

LM: I’m working on a guitar for Pat Metheny right now that is very close to being finished and I’ll be sending it to him within the month. He always surprises me with what he does with my instruments. He is so adaptable to whatever I make for him and he finds ways to musically explore it that I usually can’t imagine. He’s such a pleasure to work with.

And I’m working on a series of archtop guitars for some really wonderful players who have been patiently waiting. Some supplies have been a little harder to get, and with the lockdowns on and off in Ontario it’s made everything a little more cumbersome, but I’m one of those lucky people who gets to work at home so absolutely no complaints from me. I am extremely grateful to the people on the front lines keeping everything working and adapting to the ever-changing rules and protocols. These people are heroes.

MS: 2022 is going to be the 100th anniversary of the modern archtop guitar, as exemplified by the first Lloyd Loar L-5. I really enjoy making archtop guitars and pushing the boundaries of what they can be and what they can do; I have a couple of very special projects in mind to celebrate that milestone. So far they’re just on the drawing board, but I can’t wait to start sharing their progress!

Final reflections, on the pandemic and the future:

MS: As a very (very!) small business I can’t really separate the company from the person – they are the same entity. Always have been. And that entity is looking forward to backyard BBQ dinners with friends and family – the kind where you just relax and accept all the noise, mess and chaos as an inevitable part of life. Because now I know that it’s not.

LM: While this year has been incredibly challenging and nightmarish for a lot of people, there’s some aspect to what has happened to all of us socially that may change us all forever. Some for the good, I hope. There will be some healing to do and I hope we can all look after each other. My own personal experience of this imposed isolation is reminiscent of how my career started when I worked really long hours alone and was able to dive deep into what I was doing without interruption. It’s been cleansing in some ways and feels a little like a full circle. But I’m really looking forward to hugging my friends and family.