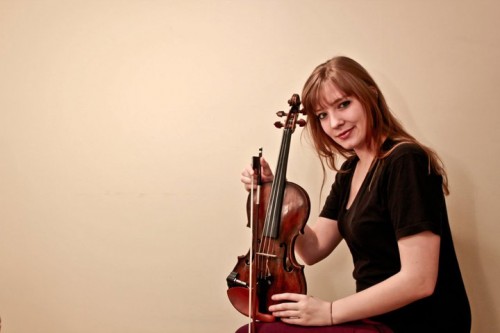 In the United States in the 1970s, the concept of the musical bitch was big. There was the Rolling Stones’ recording Bitch from 1971; David Bowie’s Queen Bitch from later that year; and Elton John’s The Bitch Is Back in 1974. And, perhaps most importantly, there was the precursor to them all: Miles Davis’ 1970 release Bitches Brew, a jazz-rock album that would eventually garner seminal status in the world of improvised music.

According to musicologist Gary Tomlinson, Davis’ album title referred to the skill of the musicians themselves – best-of-the-best improvisers, brought together for the recording. And though 1970 was coincidentally the same year that Jo Freeman published her feminist BITCH Manifesto (seminal itself, in other circles), the album’s connection to “bitch” as a gendered term was supposedly just that – coincidental.

These words have weight, though – and as they go in and out of vogue, the connotations they carry change in the process. So when violinist Aline Homzy submitted an application to this year’s TD Toronto Jazz Festival Discovery Series for a project called “The Smith Sessions presents: Bitches Brew,” she had a lot of musical and linguistic history to reckon with. And when her application was selected, with a concert of the same name slotted for this April 28 at the Canadian Music Centre’s Chalmers House in Toronto, she knew it would be a starting point for something new.

“Bitches Brew” is a quadruple-bill show, featuring four different women-led ensembles. With groups fronted by Homzy, flutist Anh Phung, bassist Emma Smith and drummer/percussionist Magdelys Savigne, the concert is Homzy’s 21st-century take on what it means to equate “bitch” with musical talent, and on how our community thinks about musical artistry today. Same name, new vibe – in a very good way.

The project comes to Toronto via Edinburgh, from a concert series of the same name run by bassist Emma Smith. On her website, Smith writes that her Bitches Brew sessions are a response “to the eternal assumption that the only woman in the band must be the singer” – a way of highlighting local Edinburgh talent while confronting stereotypes that women often face in improvised music. After playing on one of Smith’s sessions in August 2017, Homzy started to talk with Smith about bringing the series to Canada. When the applications opened for the 2018 TD Toronto Jazz Festival Discovery Series – a concert series that gives Jazz Fest branding and support to innovative local projects – the timing felt right.

On April 28, Homzy and Smith will play a violin/bass duo, featuring some of Smith’s compositions; flutist Anh Phung will improvise with bassist Alan Mackie, in their duo project HaiRbraIN; Magdelys Savigne will lead a trio project, singing and playing percussion alongside Elizabeth Rodriguez (violin and vocals) and Danae Olano (piano); and Homzy will bring her own band, Aline Homzy’s étoile magique, where she’ll be joined by Chris Pruden (piano), Daniel Fortin (bass) and Thom Gill (guitar).

At her Toronto apartment last week, Homzy spoke about how for her, this project came out of a feeling of something lacking in the local jazz ecosystem – and about wanting to bring it to light.

“I told Emma, ‘We have to do this in Toronto. Toronto needs this,’” she says. “Normalizing the roles of women in bandleader positions. As a student, I felt like that was not at all present in school. I don’t think there’s a single full-time woman professor at U of T [in Jazz Studies]; I think there are only a couple at Humber. It’s important for the community for students – women students – to see that it’s possible. And also to provide role models for younger people as well, however they identify… it’s important for them to have a diverse roster of people who are successfully doing what they do, and who are really good at it.”

Having gender-diverse leadership is important for any industry, but it can be particularly crucial in fields like the performing arts, where so much of what happens onstage is guided by performers’ offstage social relationships. In a 2013 article for NewMusicBox, Ellen McSweeney talks about how women performers often pay a hidden “likability tax” when they come off as too self-promoting, assertive, or success-oriented. And in an ensemble situation, where performers rely on having both a supportive fan base and a network of collaborators to survive, being seen as unlikable can carry a high cost.

“I’m doing ‘bitch’ in quotations right now, because I understand it’s a swear word as well,” says Homzy when she explains the project. “But for us, it’s reclaiming that word – especially as a woman leader, when women often get called that name for being too bossy.”

It’s a mentality that impacts how women musicians operate within jazz culture – and one that extends to the way that they perform. In his book Swingin’ the Dream, Lewis Erenberg writes about how during the 1940s, women musicians were often seen as temporary, annoying replacements for the men who went to war – and that the prevailing opinion was that they should either act like “good girls” or “play like men.” Seventy-five years later, Homzy still encounters that attitude in the field.

“I think one reason why a lot of women don’t show up to jam sessions is because you feel like you really have to prove yourself,” she says. “Everyone feels intimidated by that situation, but as a woman, it’s like – doubly that. And some people – some guys – will see a woman come in and on purpose count in the hardest tune, really fast, because they want to see you fail. It’s really discouraging to witness.

“It becomes about [whether] you’re able to, we say, ‘Hang with the guys,’” she continues. “If you can ‘keep up’ then it’s like you’re considered ‘ok’ in the guys’ books. I think that some women take that position: ‘I’m like one of the guys.’ And I think it’s really dangerous. I’ve been in that situation too, where I’ve been like ‘I feel like the guys are accepting me.’ You soon realize that there are sometimes ulterior motives for that, which are quite disturbing.”

Homzy says that it’s a particularly big problem for younger women artists who are early-career or still in school, because it can make it difficult for them to realize their worth. “It took a lot of work for me to realize that wanting to be in the ‘boys club’ was a really toxic way to think about myself,” she says. “I feel like it’s hard to know how good you are, when you first come out of school. As a female instrumentalist, you’re always told, ‘Play more like this,’ or relating to my instrument, ‘Play more like a saxophone, play more like a horn.’ [I had to] come out of school and realize, no – that’s not what I’m doing. I’m a violinist, this is my sound and this is my style.

“You [begin to] realize that sometimes you’re maybe even better than some of your male colleagues – which is interesting, because a lot of male colleagues tend to think that they’re better than you,” she adds. “And it can be really uncomfortable, because [those colleagues] really want to take over – in conversations, and in music.”

For Homzy, that gendered feeling of being unheard has particular amplifications within the jazz world as a whole. It’s a big part of why she chose the Canadian Music Centre – a space not often seen as a jazz venue, and a first for the TD Toronto Jazz Festival – for this show.

“Part of the reason that I applied for this project was that I wanted it to be at a venue that wasn’t just a bar or a club,” she explains. “I wanted it to be in a ‘listening room,’ where people listen and don’t talk – where we’re all there to listen to the music. All four of us write original music and we all consider ourselves artists. I wanted to provide a place to play where people are going to listen, as opposed to talking over you.”

I ask if there are many spaces in Toronto like that for jazz; she says there aren’t.

She mentions that she came to the violin from a classical background, and that the feeling of being undervalued as an artist is a chronic issue in the non-classical world. From her perspective, the difference is night and day.

“We’re just not taken as seriously,” she says. “You see it with the way we get paid. You see it with how people think it’s ok to talk over what you’re doing [at any point]. I want to bridge that gap, and show people that improvised music can be – and is – really awesome.” 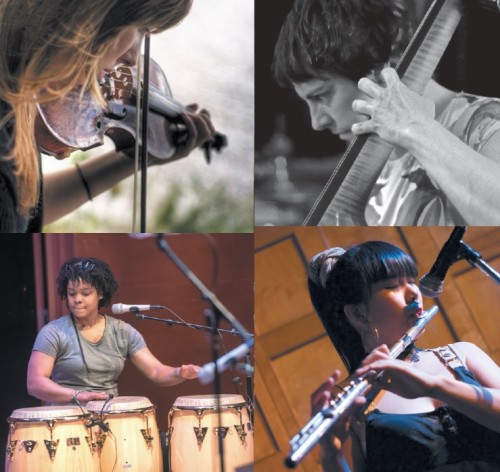 In December, The New York Times published an article claiming that 2017 was a “year of reckoning” for women in jazz – a time when we saw a number of standout women instrumentalists presenting projects that were bold, musically inventive, and squarely their own. It’s an idea that shouldn’t be that shocking – but Homzy talks about how even today, people seem to have a hard time coming around to the idea of women authorship in music.

“The info about this project is all there. But so many people have seen it and asked me, ‘Wow, so are you playing the whole Bitches Brew Miles Davis album?’” she laughs. “It’s funny, but also kind of disappointing in some way. Because they completely missed the point.”

Still, Homzy is dedicated to lifting up the work of women creators. Not because there’s anything inherently distinctive about their music – far from it – but because there’s a lot of valid experience and perspective there. And when our music doesn’t represent the demographics of our communities, that perspective, and the power and beauty that go along with it, is something we miss out on.

“I realized, after so many years: I’d been doing these things, playing or writing-wise – not specifically because I wanted to please other musicians, but because I’d been influenced by that [oppression],” she says. “And now, I’m writing music in a way that is influenced by those experiences. We’ve experienced different challenges; I think that makes a lot of women’s music sound unique and different.”

That 2017 New York Times article references the same thing. “There’s nothing to suggest that these...musicians expressed themselves in any particular way because of their gender,” it reads, “but what we know is that until recently they might not have been in a position to stand up onstage alone, addressing the audience with generosity and informality, empowering the room.” As Homzy seems to attest, that’s its own rare and powerful thing – and an experience that, without question, is worth seeking.

“The Smith Sessions presents: Bitches Brew,” featuring Aline Homzy, Emma Smith, Anh Phung and Magdelys Sevigne, will be presented on April 28 at the Canadian Music Centre’s Chalmers House in Toronto, as part of the 2018 TD Toronto Jazz Festival Discovery Series. The event will also be livestreamed by the Canadian Music Centre, at https://livestream.com/accounts/13330169/events/8050734.

Sara Constant is a flutist and music writer based in Toronto, and is digital media editor at The WholeNote. She can be reached at editorial@thewholenote.com.