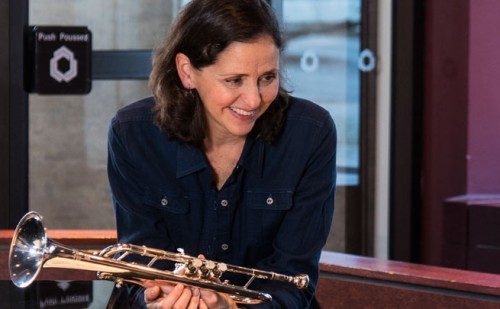 In an article last October, Quartz examined the workplace demographics of 22 of the world’s top orchestras. “This fall,” that article begins, “the world’s great symphony orchestras will open their 2018/19 seasons. And just as they have for decades, many of them will be sharply segregated by gender.”

The study was (of the authors’ own admittance) rudimentary and, when it came to guessing the gender identities of orchestra members based on names, images and bios, highly speculative. But at the same time, it proved a valid point: that when it comes to determining who should play which musical instruments, old habits die hard. In those 22 orchestras, 94% of the harpists were female, while all of the trombone and tuba players across the board were men. Of the 103 trumpet players listed as full-time musicians in those orchestras, only one—Anne McAneny, of the London Philharmonic Orchestra—was a woman.

For many brass players, it’s a familiar problem. Part of it comes from the history of brass instruments in hunting, industrial bands, and the military. Part of it also has to do with which instruments have historically been seen as delicate and suitable for domestic performance—a category where instruments like trumpet and trombone rarely landed. Either way, when instrument choice is so segregated in this way, it affects everything from teaching practices, to gendered divides in pay grades, to how leadership and musicianship are negotiated in the industry.

This week at the University of Toronto, the Canadian Women Brass Collective is presenting ‘That’s What She Said’—a 5-day conference dedicated to gender diversity in brass music. Running from Jan 15 to 19, with masterclasses, workshops, competitions, concerts and roundtable discussions, ‘That’s What She Said’ aims to celebrate and support women brass musicians, from the student to professional levels—and realize new understandings of who, and how, brass players can be.

For Canadian trumpeter Karen Donnelly, working towards a professional career as an orchestral musician meant facing that gendered dynamic firsthand.

“When I was a young player studying in the late ’80s, there was one woman that I knew of in an orchestra job. Joan Watson was Associate Principal Horn at the Toronto Symphony at that time,” Donnelly explains over the phone, “That was the only woman I knew. And then later, when I was a student at McGill, there was a trombone player: Vivian Lee joined the Montreal Symphony. So, then there were two women—two women who made me believe that, oh my God, I can do this. Because there was that one person who was already doing it—and now there’s two.”

It was a realization that worked for her. Now midway through her 22nd season as Principal Trumpet of the National Arts Centre Orchestra in Ottawa, Donnelly is a driving force behind the Canadian Women’s Brass Collective, and the upcoming U of T conference—the organization’s first-ever event.

“Basically about a year ago, I emailed friends and colleagues and asked: ‘Would you be interested in doing a project like this?’” Donnelly says. “And basically, not one person wrote back with a negative response.”

Other artists of the collective featured at the conference include tubist Karen Bulmer, trombonists Megan Hodge and Vivian Lee, trumpeters Amy Horvey and Merrie Klazek, horn player Catherine Turner, and conductor and trumpeter Gillian MacKay. Several other musicians and arts workers are involved in the conference project in other capacities, and several others still, says Donnelly, weren’t available—but everyone who she contacted expressed support for the project and mission.

The conference, which hosts events at U of T each afternoon and evening from Thursday, January 17 to Saturday, January 19 (as well as an opening masterclass that took place on January 15), features an orchestral excerpt competition, as well as several masterclasses, talks and clinics geared towards early-career players—and a final ensemble concert on the 19th that will bring together artists of different abilities and levels from across the country.

“Thirty-nine women brass players and percussionists, coming from 7 different provinces, 9 different orchestras, and 4 different military bands, including 5 or 6 student apprentices up there playing with us—and musicians from Newfoundland and the University of Victoria,” says Donnelly. “Coast to coast.”

As a model, Donnelly looked to the International Women’s Brass Conference (IWBC), an existing US-based project founded by Susan Slaughter, the former Principal Trumpet of the St. Louis Symphony, in 1993.

In a 2017 interview with Jennifer Hambrick of WOSU Public Media, Slaughter describes the feeling of those earliest IWBC meetings, where women brass players were able to meet and share their experiences with one another—in many cases for the first time.

“At the time, most (orchestra) brass sections, when there was a woman in it, there was only one,” Slaughter says. “And [there were] things that we could never say to our colleagues, because we were put in situations that if you said something back, you could pay for it later, or you were considered not one of them or something like that. So you just kept your mouth shut. But when you came to our conference, we would go out afterwards and people could start talking—'What do you do in this situation?'"

For Donnelly, Slaughter’s work at the St. Louis Symphony and IWBC, and the community of musicians that she helped to create, served as an inspiration—first as a young trumpeter, and now as a teacher and organizer of an analogous Canadian project. In that vein, things have come full circle: the IWBC is serving as a sponsor for this week’s ‘That’s What She Said’ conference, while Donnelly hopes that from this event forward, the Canadian Women’s Brass Collective can begin to build a similar community of mentorship and support that’s more accessible for Canadian artists and students—connecting local early-career musicians with professionals in the field who are doing the work.

“I think that aspect of the conference is the most important part of it,” she says. “Creating a mentoring situation—one that is a positive, inclusive, joyful experience.”

‘That’s What She Said’, presented by the Canadian Women’s Brass Collective, takes place from January 15 to 19 at the University of Toronto. More information can be found at www.canadianwomensbrasscollective.com.