It’s fascinating to watch the extremes of tone and temper that can be conveyed by social media, where sober second thought has about as much of a place as kombucha does while watching the Maple Leafs at Toby’s on St. Patrick’s Day.

On Facebook, for example, one gets the occasional reasoned utterance. Yesterday, for instance, there was this one, shared with me (and 50 others) by an individual who has provided the quiet administrative continuity to a mid-sized chamber orchestra in town for the past 22 years: 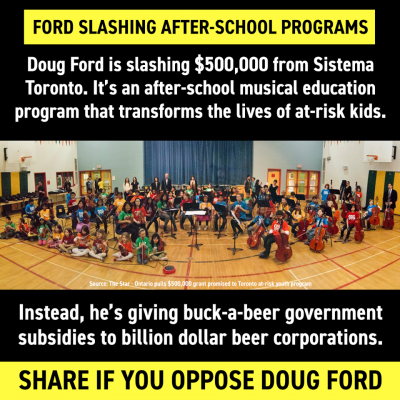 Participation in musical activities helps EVERY other part of children’s development, and also promotes habits that enable a more civil society. Funding after-school music programs saves tax dollars that would otherwise have to be spent later, in health care, mental health care, the justice system and other social services. De-funding such programs is a HUGE mistake. Write to your MPP and object!

Unless, like me you are a shrinking violet who still reads CAPS as SHOUTING, the post might just pass you by, especially if the south-of-the border twitterings of Agent Orange have become as obsessively compulsive a daily focus of attention for you as they have for me.

Taken together the two versions of the same message got me thinking, in a way that neither on its own would have. As follows:

Here at The WholeNote, we started following the fortunes of Sistema Toronto, almost from its inception, right after El Sistema’s Venezuelan founder José Antonio Abreu was awarded the eighth Glenn Gould Prize in 2008. El Sistema, as I learned then, thanks to the consciousness-raising power of prizes and awards, is a publicly financed, voluntary sector, music-education program, founded in Venezuela in 1975 and providing “free classical music education that promotes human opportunity and development for impoverished children.” (Over 700,000 of them, by 2015, in Venezuela alone). After school. Four hours a day. Four days a week.

Impressed as I was at the time, I confess to having been cynical about the likelihood of transplanting it from a country with a government that has the power to simply set up a program like that at the stroke of a pen. Here, you don’t get to build things that way. Only, apparently, the power (also at the stroke of a pen) to tear them down.

Visits to Toronto Sistema over the years, seeing children willingly and joyfully, commit to an after-school regime of work and play not much less rigorous than the Venezuelan model, made me change my mind about its viability. Yes, Margaret. I will definitely write to my MPP and object.

But first I have one more thought to offer. I think we make a mistake to argue a case for the redemptive powers of things like Toronto Sistema if we tie our outrage only to the fact that it is a music program that is under attack here. Or to the fact that it is specifically targeted to so-called “at risk” neighbourhoods.

The way our society is structured, the four hours of the day between the time most children get out of school and the time most home-based supervision or mentoring kicks in is when all of our children are most at risk. Make no mistake, their appetite for learning, their hunger to belong will not be any the less during those hours when deprived of such opportunities as these to exercise joyously and cooperatively the social muscles that enable a civil society. If we do not put instruments of peace in their hands, what will they take up instead? And from whom?

And who will be most at risk then, crying into our beer-for-a-buck about how “kids got no respect for the law today”?