This month’s issue contains at its centre our 15th annual “Blue Pages” directory of presenters - a compilation of around 150 players in Southern Ontario’s musical life. As it says in the Blue Pages intro, we make no claim to completeness.

For one thing, there’s no such thing as completeness in the area of live musical endeavour; like music itself, new voices and venues arise out of, and return, to silence. For another thing, there is no perfectly definable boundary to the range of genres we include in these pages, partly because we have limited space (in print, anyway) and partly because you our readers have limits to the time you want to spend wading through events you are not interested in, searching for the ones you might be. Again this is more of an problem in print than in digital media. Speaking of which, there are some VERY significant milestones just ahead for The WholeNote on the digital front - as next issue’s opener will reveal.

Beyond the question of logistical constraints to the range of what we cover, there is also the very interesting question as to whether the method of dividing up the musical universe into discrete musical genres, each with a separate “beat columnist,” will stand up to the demands of what promises to be an era of increasingly fluid musical practice. (Witness Andrew Timar’s story on David Dacks and the Music Gallery on page 16 and Wende Bartley’s thoughts on transculturalism immediately following it.)

Anniversaries: devotedreaders of this column both know that I have a love-hate relationship with the topic of anniversaries. (If you are reading this on our website you can simply click here to read my October 2008 reflections on the subject.) It’s a particularly thorny topic in October, when we are trying to come up with a cover image which reflects, on behalf of ALL our Blue Pages members, the range and spirit of the music we cover – a task to which we bring the same high seriousness that the Canadian Olympic Association does when choosing the country’s flagbearer for the opening ceremonies of each Olympic Games.

Anniversaries aren’t always the deciding factor, though. Otherwise this year would have been no contest, with the Toronto Mendelssohn Choir, celebrating an astonishing 120 years of continuous existence (see the write-up of my chat with the TMC’s Noel Edison in “Conversations <at> TheWholeNote” on page 14).

Ten years ago Inna Perkis and Boris Zarankin of Off Centre Music Salon graced our October cover. This was partly because they had started out the same year we did, and with the same lack of any official endorsement or precedent. And partly because of their unique formula: virtuosic two- and four-hand piano playing along with chamber music and art song contributions by guest artists, all in the spirit of a 19th century salon, with ideas being tossed around with the same verve as the music.  Happily they are still at it; this October 26 is the 20th installment of their annual Schubertiad, kicking off yet another four-salon season at the Glenn Gould Studio.

Turning from the topic of the cover of the magazine to the cover of the Blue Pages, how does a photo of the city’s second largest concert hall speak to the range of music we cover? Well, there is the music that RTH/Massey presents, spanning a range of genres and cultures. Then there’s the fact that the photo covers two performance spaces – the hall inside, and the great outdoors. Then there’s the hall’s anchor tenant, the Toronto Symphony Orchestra whose individual members  are the animators and architects of dozens of other small musical ensembles in the city. And finally, there are the one-time entrepreneurial “upstarts” such as Attila Glatz and Show One Productions, for whom conquerin,g “the Hall” for the first time was a significant milestone on their road to credibility in our ever evolving, endlessly fascinating musical scene.

(Besides which, its a gorgeous photo.) 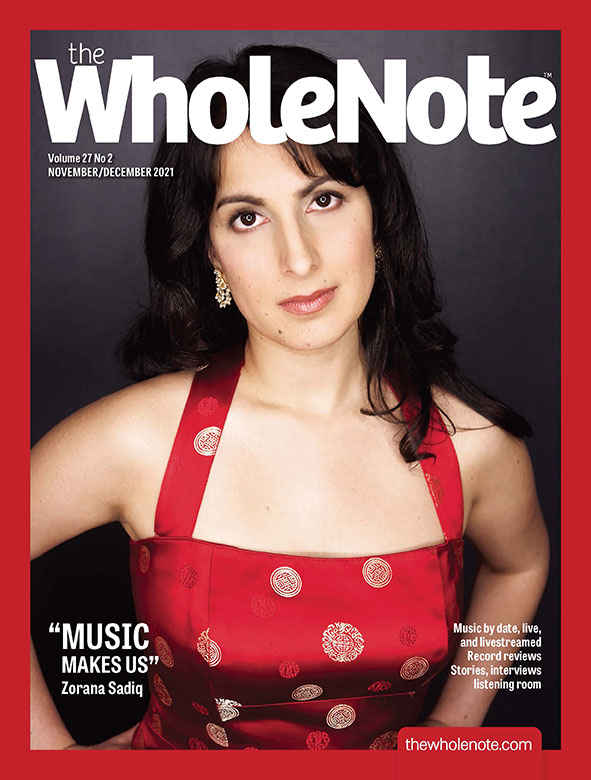