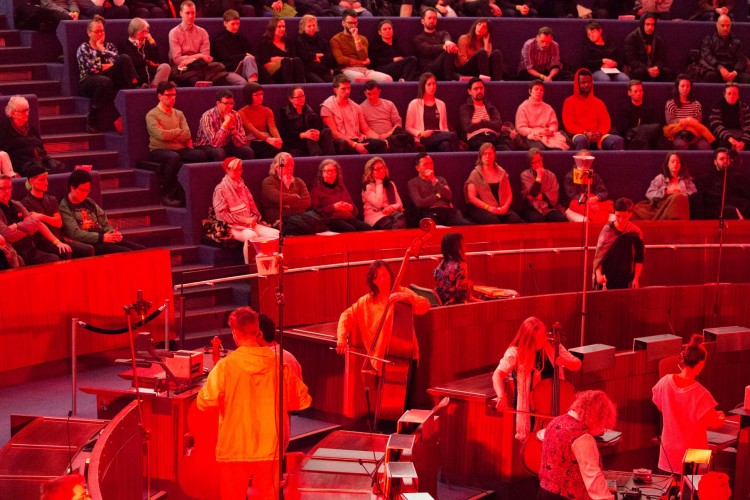 In mid-February, the Music Gallery and other presenting partners created a weekend of events focused on the work and legacy of Pauline Oliveros and her partner IONE in a three-part form: a reading, a workshop and a concert.

The experience of Deep Listening, Oliveros’s core practice, was at the heart of all three activities, so I will begin with a look at the middle event of the three: a Deep Listening workshop presented by the Music Gallery and 918 Bathurst on February 16. Offered by Anne Bourne and special guest IONE, this opportunity for a hands-on experience of Deep Listening involved the creation and performance of a selection of Oliveros’ best-known scores, pieces she called Sonic Meditations earlier in her career. She later coined the term Deep Listening to mean “listening in every possible way to everything possible to hear no matter what one is doing.”

The scores we performed are one way to experience this way of listening, as they invite the audience to collectively create the piece while simultaneously listening and sounding. The workshop opened up with both body and vocal warmups, including intoning on different vowel sounds while being aware of different areas or energy centres of the body. The group began to cohere as one sounding body, within one resonating place – and this awareness of collective listening and sounding deepened throughout the afternoon as we moved from one score to another.

One of my favourite scores we performed that afternoon is entitled Extreme Slow Walk, one of Oliveros’s first pieces that I had experienced many years ago in the late 1970s when the Music Gallery was located on St. Patrick Street. This time, we were instructed to walk very slowly around the room, being aware of each micro movement necessary for placing one foot in front of the other. While walking, we were also to sing a favourite childhood song, sustaining each note of the song with each step. What emerged in the listening space was a full sonic texture of shifting pitches and harmonies that created a tapestry that one’s own sound was a part of. As discussed a bit later in the workshop, most participants found it almost impossible to hold the melody intact, even if the song were as simple as “Row Row Row Your Boat.” Despite this sensation of dislocation, it didn’t seem to matter so much, as the more collective goal of creating a shifting harmonic texture took precedence. Something else was at play.

Appropriately, it was Valentine’s Day when IONE offered a reading from her book Pride of Family: Four Generations of American Women of Color, a memoir that is clearly a work of passion and love for the astonishing and accomplished women in her family’s lineage, including her mother, grandmother, great-aunt and great-grandmother. Reading at A Different Booklist on Bathurst Street, at an event co-presented with Art Metropole, the Music Gallery, and Public Recordings, IONE began the evening talking about the important role that both Toronto and the Bathurst Street area played during the days of the Underground Railroad, and shared that one of her uncles used to own a railway, a history she’s currently researching. She began working on Pride of Family in the late 1960s, around the same time that Pauline was composing the piece that was performed on the February 17 concert – To Valerie Solanas and Marilyn Monroe in Recognition of Their Desperation – an interesting detail given that the two had not yet met one another. IONE had been very involved in the burgeoning feminist movement of the late 1960s and 70s and published some of her research in Ms. Magazine. She spoke about the how these feminist gatherings helped change her “from a negro girl to a black woman, going from wearing bangles to combat boots.” She began raising questions of whether she felt at home as a black woman in America and realized that the lives of her female ancestors were shrouded in mystery.

In the preface to her book she wrote: “From the moment I read the words [my great-grandmother] Frances Anne Rollin wrote in Boston on January 1, 1868 – ‘The year renews its birth today with all its hopes and sorrows’ – she became my beacon, the foremother who would finally share with me our collective past.” And so she began her search for the stories of these foremothers, a term she coined as she researched and wrote. What she would eventually discover was a lineage of extraordinary, educated and accomplished women. Her mother was a journalist, actress and composer; her grandmother was a proprietor and chef of a well loved restaurant; her great-aunt was one of Washington’s first black female physicians; and her great-grandmother played a significant role in the feminist and abolitionist movements of the late 19th century, writing the biography of black statesman Major Martin Delany, the first full-length biography written by an African American, with her own diaries being the earliest known diary by a southern black woman.

IONE’s book was published in 1991. She remarked during the Q&A that this was during the same time period that Pauline released her Deep Listening CD (1989), recorded in a water cistern located in Washington State. The term ‘deep listening’ began as a joke when Oliveros reflected on the music she and her colleagues had just completed several feet below the earth’s surface. As IONE and Oliveros embarked upon their life journey together, IONE became a regular performing partner, at first by reading poetry as part of the musical performance, and later on allowing words and sounds to spontaneously arise in the moment.

That Sunday, February 17, I was honoured to sit beside IONE during the performance of Oliveros’s To Valerie Solanas and Marilyn Monroe in Recognition of Their Desperation, a collaborative effort from Public Recordings and the Music Gallery that took place at the heart of Toronto’s political life – the City Council Chambers.

It is difficult to find the adequate words to describe the experience, as was often the case after listening to Pauline perform. She wrote the piece in 1970 after reading the Scum Manifesto by Valerie Solanas, who argued that men have ruined the world, and that it is up to women to fix it. In a note passed on to me by Christopher Willes and Anne Bourne, who were both involved in the city hall performance, Oliveros stated: “Intrigued by the egalitarian feminist principles set forth in the Manifesto, I wanted to incorporate them in the structure of a new piece that I was composing. The women's movement was surfacing and I felt the need to express my resonance with this energy. Marilyn Monroe had taken her own life. Valerie Solanas had attempted to take the life of Andy Warhol. Both women seemed to be desperate and caught in the traps of inequality: Monroe needed to be recognized for her talent as an actress. Solanas wished to be supported for her own creative work.”

The concert performance of this work on February 17 lasted well over an hour, yet time passed as in the blink of an eye. In my own experience, I felt as if I had entered into a sonic trance, the sound acting as a carrier wave to create a gestalt-like experience. Instead of listening to lines of activity as in many musical performances, I experienced being within a solid sphere – a space defined by sound and awareness that encompassed and surrounded me, with a continuous invitation to enter within. The 20+ instrumentalists gathered for this particular performance included violin, cello, double bass, several percussionists, voice, flute, trombone, electric guitar, electronics, synthesizer, and an orange traffic cone. With no conductor, the piece’s three sections were marked out using lighting cues, and other key points in the score were demarcated using strobe-like white flashes. Each performer came prepared with five chosen pitches which were to be played as very long tones, at times with modulations or changes to volume, timbre, or other possible ways within the instruments’ abilities. (In preparation for the performance, there were two public rehearsals held, one at OCAD university and the other at U of T’s Faculty of Music.) And the chosen performance space – a place where democracy is played out (in varying degrees of success) – was the perfect setting for this work of high-stakes politics.

Oliveros once said, in response to being questioned about what musical ideas she was working on: “Well, I haven’t been working with musical ideas for a while, but I’ve been working on my consciousness, on my mode of consciousness, and the result of the mode is the music.” For me, this is the essence of her work – to offer the opportunity for people to experience another paradigm or way of being with sound that stands in stark contrast to the traditional Western European classical music model. Given the conflicts currently playing out on the world stage, it is my opinion that any form of resolution or movement forward can only be accomplished through the act of listening – and how we participate in and deepen our skill with listening, and with understanding our modes of consciousness, is a critical aspect of being and living within the present.

Article and photo credit updated on March 15 at 3:20pm to better reflect the participating artists and intent of the author.