This article is part 2 of a 3-part series on the 2018 TD Toronto Jazz Festival. 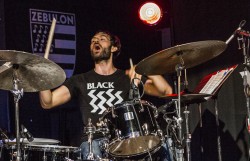 This is the metal, and this is the jazz. Drink full and descend.

The Rex has always presented a healthy mix of musical acts, both in terms of genre and provenance; it is typical, during any given week, to find trad jazz bands, Toronto jazz veterans, bands led by young musicians from Humber and U of T, and touring out-of-town groups, often based in New York. It was, in fact, at The Rex that I first heard Weiss, playing with the Chris Tarry group, back in 2007. In the past few years, The Rex has been especially proactive in bringing progressive international groups to Toronto, with an emphasis on projects that feature new music from just outside of the modern mainstream scene, although the players who constitute these groups typically have bona fide jazz tradition credentials.

This is certainly the case with Starebaby, which, in addition to leader Weiss (drums), features the talents of Ben Monder (guitar), Craig Taborn (piano and keyboards), Matt Mitchell (piano and keyboards) and Trevor Dunn (bass), any of whom could have headlined at The Rex as leaders of their own bands. Starebaby’s music is composed by Weiss, and is influenced by David Lynch’s TV series Twin Peaks: The Return. This influence is apparent in song titles, including “Badalamenti,” named after series composer (and longtime Lynch collaborator) Angelo Badalamenti, and “Episode 8,” named after a particularly explosive episode; in the intensity of the music (Twin Peaks: The Return is, in many ways, a masterclass in intensity); and in the Black Lodge t-shirt Weiss is wearing in the group’s recent live performance videos on his YouTube channel.

Before the band adopted the Starebaby moniker (“Starebaby” is also the title of the group’s debut album), they were identified as the Dan Weiss Metal Jazz Quintet, and there are obvious influences from both the metal and jazz traditions in the group’s music. What is compelling about Starebaby, however, is that it is so effective in synthesizing its influences into a new musical language; Weiss’s concept for the group seems to be strong enough that, unlike a lot of new bands, it seems to have emerged more-or-less fully formed.

The show started with "Depredation", a hard-hitting piece that, like many of Starebaby’s songs, juxtaposes pulsing, stripped-down rhythm section parts with an intervallic melody, played, in this case, by Monder and Dunn. The song dissolved into a beautiful solo guitar section by Monder, with heavy overdrive and reverb, which resulted in a sense of both mystery and visceral immediacy that effectively established the tone for the rest of the performance. As the set progressed, it was the attention to textural detail that emerged as one of the most meaningful aspects of the band’s music. “Episode 8” – the final, longest, and most suite-like of the first set (and the album) – featured exciting shifts, and stellar individual and ensemble playing, but it also, much like the Twin Peaks episode for which it is named, asked listeners to examine the depth and nuance found during extended visits to either end of the dynamic spectrum. Beyond the impressive virtuosity of all involved, it was Starebaby’s patience – whether offering a musical rendering of a nuclear blast or a man slowly sweeping an empty bar – that made the show memorable.

Check out the album, watch them live, and also, maybe, watch Twin Peaks.

Starebaby performed on June 28 as part of the TD Toronto Jazz Festival, at The Rex, Toronto.