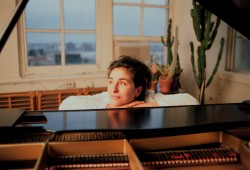 Back in April of this year, I had the opportunity to speak at length with pianist Eve Egoyan for my WholeNote column in advance of her concert on April 14 at the Music Gallery. When I asked her about upcoming projects, she spoke about her major project to be premiered at the Luminato Festival – SOLO FOR DUET: works for augmented piano and images, which received its premiere this week on June 19 and 20. One of the things I remembered her saying was how this was the most extroverted performance she’s ever done. Known for creating a depth of intimacy between herself and the audience at her performances, this new adventure was certainly an example of risk-taking by the performer, and I was curious to experience how this new venture played out.

The title of the piece, with its somewhat contradictory references to a work that is a ‘solo’ but yet a ‘duet’, turned out to be an accurate description of what unfolded on the stage. Moving beyond a mere concert presentation of the six chosen works by six different composers, a coherent flow was established between the pieces using theatrical elements and costume, a result of the work by director and dramaturge Joanna McIntyre. The other core elements of the entire program were the use of projected images as well as performing on a Disklavier, a keyboard that doubles as a digital version of the player piano, capable of performing programmed sequences and processing the sound. Present throughout the entire evening was a felt sense of the ‘other’ with whom Egoyan was in dialogue with, whether that be the composer, the images, or the music itself.

From the beginning, a distilled presence was established as the music began in darkness.  Using an extremely gradual fade-in of the light, slowly we began to see the score on the piano, the performer, and a long expanse of fabric weaving its way on the floor like a river. The first work, Thought and Desire by Linda Catlin Smith, was a love song between two people using text by William Shakespeare. Egoyan’s voice could gradually be heard as she sang the melodic line created by the short chordal harmonic progressions. Switching to a completely different persona for Homonymy by John Oswald, Egoyan put on her shoes, grabbed a whip and emotionally declaimed a series of words in partnership with a profusion of stream-of-consciousness of similar words projected on the screen – a play on the possibilities of the homonym. Oswald makes great use of the Disklavier for this piece, with programmed sequences joined at times by Egoyan playing live, along with piano preparations and inside-the-piano gestures and objects.

Nicole Lizée’s signature aesthetic of merging glitched film with virtuosic musical performance was mesmerizing in a piece entitled David Lynch Études. Using footage from Lynch’s Wild At Heart (1990) for example, Egoyan was synced up with the performers onscreen to create an aura of surreal obsession. Surface Tension is a series of five visual/musical works created by Egoyan and David Rokeby that appeared in three parts spread out over the last half of the concert. Rokeby’s interactive software created visual worlds in response to Egoyan’s performance, with the concept of ‘duet’ very much in evidence as she improvised  in dialogue with unfolding images that moved from simple to complex designs.

The technical prowess of the Disklavier really came to the fore with the final two works. EVƎ (solo piano for Eve Egoyan) by Michael Snow was created through a translation process. Snow began by improvising on the Disklavier keyboard that was subsequently transcribed into musical notation designed by Rokeby. Egoyan’s genius of being able to embody and translate notation into her own expression brought the work to life such that it felt like the two creators were merged into one. As the concert wound down to its close, Egoyan gradually removed parts of her costume, let down her hair and took off her shoes. This more naked visual image of the performer was a perfect visual complement for the moment when she premiered a work of her own creation – DUET for Solo Piano. The piece was born out of the desire to have the piano sound like she wished it could. What we heard from this exquisite work, my favourite of the evening I might add, were the subtle detuning of pitches, pitch glissandos, and the impression at times that a larger ensemble was playing. In the end the piece perfectly embodied that fluid space between solo and duet.

Eve Egoyan presented SOLO FOR DUET as part of the Luminato Festival on June 19 and 20, at the Isabel Bader Theatre, Toronto.