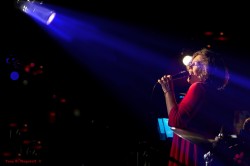 Watching vocalist Adi Braun take the stage at the Jazz Bistro on the evening of December 10 – beneath the bejewelled chandeliers, vaulting mezzanine and crushed velvet curtains – it was difficult to think of a more appropriate setting for the club launch of Moderne Frau, Braun’s new release on Blue Rider Records. Moderne Frau is a project that seeks to both honour and recontextualize the experiences of the women of Weimar Germany – “the original pantsuit nation,” as Braun joked to a responsive (and full) house. Like the Bistro itself, Braun’s performance of Moderne Frau evokes the charms of a bygone era, but its true success lies in her ability to move the music forward into the twenty-first century.

The concert proceeded according to the album order, beginning with the title track (a Braun original), which featured Braun ably trading scat lines with her excellent band. “Surabaya Johnny,” one of a number of songs on the program written by Kurt Weill and Bertolt Brecht, was given a medium-slow, straight-eighths treatment that allowed for nuanced interplay between Braun and pianist Tom King. Braun has excellent vocal control and a wide dynamic range, and has a particularly expressive upper register, which was on full display during the haunting, quiet ending of the song. “Buddy on the Night Shift” – another Weill piece, written with Oscar Hammerstein – is introduced with reference to the large influx of women into the workforce after World War I. As the song’s “buddies” are not gendered, Braun makes the fair point that we can just as easily imagine that they are women, rather than men, aligning the song’s lyrical content with the overarching themes of the evening.

One of the evening’s most compelling musical moments came in the introduction to “Und was bekam des Soldaten Weib?” (“And What Did the Soldier’s Wife Get?”). Another Weill/Brecht composition, the song’s lyrics detail the successive gifts that a soldier’s wife receives from her husband during his military service; the final gift is a widow’s veil. The introduction – an open, intimate voice/piano duet between Braun and King that suggested more of American jazz in the 1960s than of European cabaret in the 1920s – created a space in which the two musicians persuasively limned the simultaneous intensity and aimlessness of grief, pulling the music apart before putting it back together at the beginning of the form.

Braun’s original composition “Josephine” was a crowd favourite, eliciting much applause and no small amount of laughter (it was performed twice, the second time as an encore). Written about the American expat singer Josephine Baker, who gained fame and notoriety in the 1920s as a star cabaret performer in Paris’s Folies Bergère, “Josephine” was a swinging, up-tempo piece of musical biography, featuring Braun at peak theatricality (a slide whistle plays a key role). Though the song’s amusing flourishes may seem, at first listen, to be standard bits of cabaret fun, they are girded by the seriousness of its subject: a young woman of colour who left an oppressive America to find a measure of financial and political freedom on the stages of Europe. As such, the song’s exuberance takes on a kind of moral imperative that exemplifies the ethos of Moderne Frau: that the performative nature of cabaret could, and can, illuminate a path towards self-actualization for women living in inequitable social circumstances, and that joyful performance can be a serious and important political act.