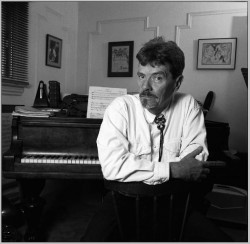 On the evening of October 15, I attended the last event of the Music Gallery’s X Avant Festival 2017, a concert titled James Tenney: Resistance. Preceding the concert was a panel discussion on the topic of socially conscious music and a lively conversation related to the evening’s repertoire. The concert was entirely dedicated to Tenney’s music, which was presented as one continuous stream of sound, punctuated with commentary before each piece from the Music Gallery’s artistic director David Dacks.

Jim, as we all called him, lived and taught in Toronto from 1976 to 2000, and was very active in creating community among both practitioners and lovers of contemporary music in the city. His own compositional focus was dedicated to understanding how we perceive music and sound, and he was committed to creating sensory-based listening experiences. One might think that these interests might be a contradiction with composing “socially conscious music.” However, the pieces we heard demonstrated how brilliantly Jim wove his theoretical concerns with a strong message on culturally relevant issues. Even though I had heard many of Jim’s pieces in the past, the combining of these five pieces into a coherent whole powerfully shone a light on this aspect of his work.

The concert began with Viet Flakes, a film by Carolee Schneemann for which Tenney composed a tape collage. The piece was originally created for a New York City arts festival in 1965 designed to bring awareness of the American involvement in the Vietnam war. Tenney used pop song recordings to create his tape collage, highlighting the contrast between carefree American lives and the horrors being inflicted thousands of miles away. Tenney’s tape piece Fabric for Che from 1967 followed, a dense and continuous stream of sound composed as a “scream of frustration” in response to the way the liberation movements of Central and South America were being portrayed by the US government.

Timbre Ring, composed in 1971, received its world premiere at this concert, and is a perfect example of Tenney’s intention to bring awareness to listening and perception. The eight performers from diverse musical and cultural backgrounds surrounded the audience and passed between them one single pitch, using fluctuations in timbre, dynamics and rhythmic pulsations. Behind the choice to program this work is another important story.

Tenney’s work Ain’t I A Woman (1992), based on an 1851 speech by Sojourner Truth that combines anti-slavery resistance and women’s suffrage – what we would now call an intersectional feminist text – was considered for performance. However, after a lengthy consultation process with the community, the decision was made not to program the piece. Since no black women were involved in the original creation process, one concern was that if nothing was changed for this performance then it would be problematic. In addition, some in the community felt it inappropriate to program a work of white art based on black pain.

Interestingly, during the panel discussion earlier that day, all three of the panelists expressed their disappointment with this decision. Sci-fi turntablist SlowPitchSound, himself a member of the black community, felt that in this case, it’s really about the “message being made and trying to get more ears to hear things. Sometimes it gets stuck at race, and goes no further. With art you’re supposed to be free to come up with things, but yet you can’t.” Performer and scholar Parmela Attariwala expressed her desire to have had the conversation and then heard the piece. “I wish we could do that with more pieces. There are a myriad of western classical pieces that are controversial and we haven’t thought about it.” Lauren Pratt, who was married to Tenney from 1988 until his passing in 2006 and currently manages his archives, pointed out a potential contradiction between the ‘no’ decision regarding this work and the programming of Pika-Don, which uses texts of Asian women and children who survived the bombing of Hiroshima and Nagasaki spoken by white women. Dacks acknowledged this in his program remarks, but felt that since this work used texts recounting several sides of the story, including texts by American scientists, this was an example of “reportage turned into artistic expression” and “was illustrative rather than exploitative and doesn’t speak to a larger history of exploitation as had been pointed out about Ain’t I A Woman.” Many more important points were made in this conversation, which can be viewed in full at https://www.facebook.com/events/1474084846013659/permalink/1532822040139939/

Listening to Pika-Don, composed for four percussionists and pre-recorded spoken text, was challenging – simultaneously hearing familiar voices amidst reminders of the utter devastation caused from the dropping of the atomic bomb. The first half is based on quotations from the scientists involved in the creation and testing of the bomb, with the texts for the second half as noted above. The horrors of this event were profoundly captured in the percussion part while the texts, densely layered at times, also added to the cacophony. Tenney wrote the piece in 1991 and invited members of the Toronto community to record the texts, myself included. It was uncanny listening to the very intimate sound of people’s voices that one knew, juxtaposed with the catastrophic realities of nuclear war.

The evening concluded with Listen…! composed in 1981/84 and performed at the concert by three female singers with piano accompaniment. The text for the piece was written by Tenney and reminds us that it’s really up to us in how we respond to the injustices of the world. Despite the seriousness of the words, the music was set in a light-hearted manner, as a sendup of popular music.