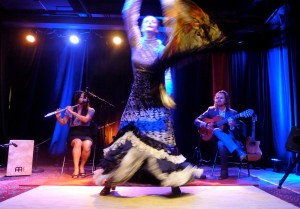 On September 3, I had the pleasure of experiencing an absolutely breathtaking performance. Led by dancer Lia Grainger and comprising guitar, flute, vocals and cahon, Canadian/Spanish ensemble Fin de Fiesta Flamenco appeared at the Small World Music Centre that night, in the final Toronto date of a summer-long, international tour – bringing their powerful interpretations of Flamenco to an intimate, local stage.

Initially, the musicians entered the packed performance space with an aura of reverence and hyper-focus. The performance space itself is superbly designed for essentially acoustic artists – the lush drapery, excellent sound engineering, comfortable seating and intimacy of the room lend themselves to an authentic experience for both the audience members and the performers.

As the trio began the evening, the audience was reminded of the extreme antiquity of this musical form, as guitarist/composer Dennis Duffin introduced a “Palas” – a song of mourning, which is the earliest form of Flamenco – performed with voice and percussion only (guitar was a later addition). This heartrending vocal narrative seemed steeped in the mists of time and reminded me of other ancient musical forms that incorporate a similar scale and “recitative”-like phrasing – Celtic “Keening” (a chant of deep mourning), Christian liturgical chanting, the Muslim call-to-prayer and the chants of Jewish Cantors. Following that, a true musical highlight was the group’s rendition of Pedro Sierra’s Alegrias (Joy), which featured a lovely flute solo by Lara Wong. Acoustic guitarist Duffin is a facile and gifted musician. The tone of his instrument and his masterful playing were the spine of the performance, and vocalist Alejandro Mendia has a sinuous and powerful baritone voice – full of colours and dynamics, which perfectly captures the intensity of the form.

When Flamenco dancer Lia Grainger took the stage, things reached a supreme level. Not only was she technically thrilling, but her portable, wooden dance floor allowed the audience to hear every nuance of her complex footwork. While the rest of the ensemble shouted out words of support and enthusiasm, it was impossible to keep your eyes off of her – such control, stature, emotion. Although not Spanish by birth, I’m inclined to think that Grainger may have been a Flamenco dancer in a past life! After four mesmerizing dance numbers (including Bulerias and Guajiras), the first half of the program concluded, and Grainger left the stage dancing. 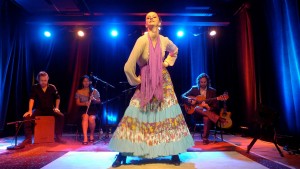 The second half of the program was enhanced by the inclusion of Derek Gray – a soulful, skilled cahon player, who brought a sensual, percussive energy to the proceedings. Also a delight was the group’s take on the Chick Corea classic Tomatito, as was the intimate, acoustic moment with vocalist Mendia and guitarist Duffin. The two musicians pulled their chairs away from the microphones and performed a traditional song of love and longing. Mendia explained that the Spanish lyric translated as “I want to be like the Jesus figure on the Crucifix that hangs from the chain around your neck – so that I can be closer to you.” Needless to say, the wave of passion created by this musical moment was palpable.

The term “Fin de Fiesta,” from which the group takes its name, refers to a kind of open “jam” that occurs at the conclusion of every Flamenco festival in Andalusia. In a heartwarming and timeless display of openness, oneness and joyful inclusion, many audience members joined the group onstage and performed alongside the performers through dance and music. Duffin danced, vocalist Mendia danced and played guitar, and flutist Wong danced and sang while Grainger kept the rhythm of Mother Earth going throughout by leading the clapping, and joining in the dance. A fitting and uplifting end to a thoroughly marvelous evening.

Lesley Mitchell-Clarke is a Media Consultant, Therapist and Music and Arts Writer based in Toronto and NYC.