It’s not often that you learn important aspects about your country’s history while attending a concert.  That was my experience on February 4 when I attended “Kanatha Canada: First Encounters,” the Toronto  Consort’s most recent program. The evening was divided into two halves – the first part a series of short pieces chosen to elucidate the occasion of the “Great Peace” of Montreal in 1701, and the second half a remount of composer John Beckwith’s Wendake/Huronia, a work originally premiered in the summer of 2015 that tells a story of early encounters between First Nations people and the European explorers of today’s Ontario.

The Great Peace of Montreal was a significant event that is instructive to understanding the full scope of the relationship between First Nations in Canada and the European explorers and settlers.  Often we hear only of the destructive European influences on First Nations’ culture, and so it was heartwarming to hear the opening words of the evening spoken by Georges Sioui, a Huron-Wendat historian, activist and songwriter who welcomed the audience and spoke of the principles of love, sharing and mutual respect.

In the summer of 1701 representatives from 40 First Nations of North America met with the government of New France in Montreal to sign a peace treaty designed to end the wars and atrocities created by a combination of the existing grievances amongst the various tribes and the conflicts caused by the introduction of the French fur trade. The story was told musically by creating a choral documentary in five parts and was a collaboration between First Nations performers Marilyn George, Shirley Hay and Jeremy Dutcher and the Toronto Consort.  Using a series of songs and instrumental pieces from both Indigenous and French sources, the large arc of this significant historical event unfolded. 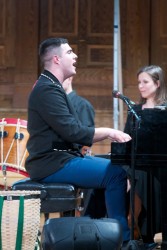 A unique highlight was Dutcher’s performance in which he mixed recordings of songs from his Wolastoq ancestors with his live performance on the piano and voice.  These recordings were originally made on wax cylinders found in the Museum of Canadian History in Gatineau.  Dutcher digitized the recordings and played them from his laptop perched on the piano.  As the songs progressed, Dutcher added harmonies on the piano to accompany the melody and then eventually sang the song, accompanying himself with extended piano chordal harmonies. Each of his songs was also accompanied by projected images of scenes from the Wolastoq culture. A significant event during the peace process was the death of the Wendat leader Kondiaronk. One of the songs chosen to lament this event was a beautiful heartrending piece found in the music collections of the Ursuline convent in Quebec performed by Toronto Consort’s soprano Katherine Hill.  The overall affect of this weave of vocal and instrumental pieces of both Indigenous and French traditions was a sense of dialogue and exchange between these two cultures, a quality that was certainly present in the early years of the 18th century that led these two people to a great moment of peace.

The performance of Beckwith’s Wendake/Huronia in the second half provided a look at another historical moment of meeting, this time between Champlain and the Wendat people. However, this meeting of cultures did not end well.  Performed by the Toronto Chamber Choir, the Toronto Consort and Indigenous performers Marilyn George and Shirley Hay, this choral documentary in six parts begins with a sonic reference to snowshoeing, which is designed to give an aural impression of life before European contact.  Switching to a choral contrapuntal style in the second part, the composer used words and phrases from Champlain’s travel journals in which the words “Canada” and “La Nouvelle France” appear. The third part is organized around references to canoeing, combining French phrases chanted by the chorus and the proclamation of Wendat words by individual voices.

The next two parts were full of emotion and drama.  Beckwith recreates the Feast of Souls, an elaborate and emotionally intense tradition of reburying ancestral remains through chanting, dancing and other ceremonial acts.  This feast made a huge impact on both Champlain and Jesuit missionary Brébeuf.  Given that the music created a tapestry of sorrow and an “abyss of despair”, I’m not so sure that these two Frenchmen understood the intention behind the ritual.  My sense is that this ceremony was a way of honouring ancestors, and that this combined with indigenous music and dance would repel these two Christian men. This cultural demonization and rejection paved the way for the next section of Beckwith’s work, which was a recounting of the disastrous results of the contact between the Wendat and French people. The texts reference Wendat prophecies of the demise of their honoured traditions and include a lament for how the Black Robes, the Jesuit priests, were changing names and proclaiming that the land now belonged to them.  On the advice of Georges Sioui, Beckwith didn’t end his work there, but rather focused on references to contemporary efforts to create reconciliation between settler and aboriginal cultures in the sixth and final part of the work.

The overall impact of the entire evening was very much a fulfillment of the opening words of Sioui who called for peaceful dialogue and a sharing of ways, which was, in the end, the original motivation and driving spirit of the First Nations people when European contact was first made. By combining these two choral documentaries on the same program, each telling quite a different story, one can see current efforts of creating healing and reconciliation as building upon what began in Montreal in 1701. Cultural moments such as this concert play a significant and important role in this larger mandate of restoration between the peoples of different cultures as well as with the land itself.