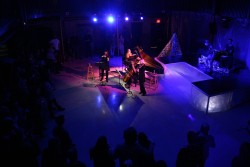 Leave it to Tafelmusik to make a phrase like ‘futuristic baroque’ actually make sense.

On Thursday, February 2 at Longboat Hall (in the Great Hall), Tafelmusik presented the latest instalment of Haus Musik, its series dedicated to combining electronic and baroque music in alternate venues around the city. The premise is to turn the early music that Tafelmusik plays into the type of party it always was in its time: these shows are standing-room only, dispensing with the traditional ‘stage-and-seats’ configuration in favour of having the musicians (for the most part) on the ground with the audience; there are always opening or closing sets from a local electronic artist; and there’s always a bar.

Thursday was my second time at Haus Musik; it was the series’ third show overall. This concert featured four members of Tafelmusik (Julia Wedman and Cristina Zacharias, violins; Christina Mahler, violoncello; Charlotte Nediger, harpsichord) playing French and English music from before 1750, alongside modular electronic musician ACOTE and dancer/choreographer Mary-Dora Bloch-Hansen, who played the part of an alien girl named Leeka with an affinity, strangely, for spoons. The visioning and staging for the show came as always from Amanda Smith, of FAWN Chamber Creative.

After an hour-long opening set by ACOTE, violinist Julia Wedman made the official introduction. Notably – and thankfully – absent were the typically-classical instructions to turn off cell phones and applaud during the proper times (“no flash photography please: it blinds us and then we play wrong notes” was all she said, understandably, on that front). After that, the music was more-or-less continuous, with a set list cleverly placed at the bar for those early music fans who wanted to know the titles and specifics of the works. 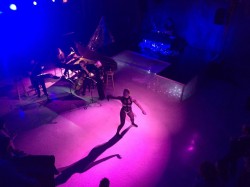 It was unapologetically a meeting of worlds. Tafelmusik’s baroque set, along with occasional electronic interludes by ACOTE, was performed in dialogue with Leeka’s dancing, which had a theatricality and musicality of its own. Both Leeka’s choreography and ACOTE’s music seemed baroque-inspired, but only in the loosest of ways – with Leeka incorporating motions into her contemporary choreography that felt somehow related to baroque dance, and ACOTE (according to Wedman) using samples from recordings of early music in his work. The drama of Leeka’s own story, who apart from occasional body percussion was silent throughout, was particularly striking; at times she included (tentative) audience participation, and at one point poured salt on the ground to draw a giant spoon (a move that, at least for those of the generation that grew up watching Neil Buchanan’s Art Attack, felt strangely nostalgic). It was all vague enough to not reduce the music to a mere accompanimental role, but clear enough for the audience to follow along.

With an economy of means, the Haus Musik team managed to put on a show that felt well-considered, cool, and distinctly classical, without any of the clichés that normally go along with classical concerts. I didn’t feel stressed about getting there on time; I didn’t feel weird standing at the bar, talking with friends, or pulling out my phone. Above all, it felt like a good party, something it can be easy to forget that classical music can be.

Between the late-night feel of Longboat Hall, the staging of the show, and the music performed, baroque music felt shiny and new last night, reflected in a fresh and fearless light.

Haus Musik will continue intermittently this year alongside Tafelmusik’s mainstage series at Trinity St. Paul’s Centre. The next Haus Musik show is scheduled for April; for details and updates, stay posted on their website (www.tafelmusik.org) and here at www.thewholenote.com.