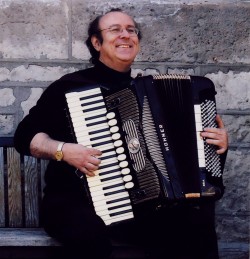 The recent Soundstreams “Squeezebox” concert on February 10 was a surprisingly playful and inspiring display of music for several fixed-reed instruments, including the accordion, the bandoneón (an instrument associated with the tango music of Argentina) and the Korean saenghwang.

The evening began with three of the evening’s performers giving a short demonstration of the characteristic sounds of their instruments. The saenghwang was immediately compelling, as the performer, gamin from Korea, introduced the unique sound of her instrument played by blowing through 17 bamboo pipes mounted vertically in a windchest. The pleasures of sitting in a café with accompanying tango music were evoked by the strains of the bandoneón, performed by Argentinian virtuoso Héctor del Curto. 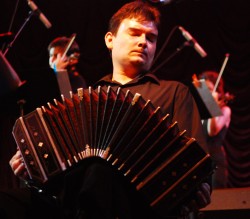 Then suddenly, in the midst of a short demonstration by accordionist Michael Bridge, the doors at the back of Trinity-St.Paul’s Centre began to rattle loudly and in walked accordionist Joseph Macerollo dressed like a circus barker. Macerollo is renowned for his pioneering work in raising the profile of the accordion in the concert hall. Shouting at the others onstage, he proceeded to interrupt and eventually take over our attention as he walked toward the front, all the while telling us the mythic Cretan story of Ariadne, Theseus, the Minotaur and the labyrinth. Thus began R. Murray Schafer’s work from 1978, La Testa d’Adriane.

On the stage was a colourful enclosed cabinet with a circular object on top, covered by an equally colourful scarf. Macerollo lifted the scarf to reveal the lifeless head of Adriane, performed by soprano Carla Huhtanen. He proceeded to awaken her with his sounds, following up with a dialogue between accordion and an array of vocal shouts, percussive utterances and bel canto outbursts. I had been eagerly awaiting the performance of this work, as I had very vivid memories of its premiere back in 1978 when New Music Concerts presented the piece at the MacMillan Theatre with Mary Morrison performing the role of Ariadne. Part of the appeal for me personally was the unique approach to vocal writing that Schafer displayed in this work, which is an example of an entirely different form of vocal writing that had gained prominence in the late 1960s and 70s with pieces such as Luciano Berio’s Sequenza III for a singing actress and Peter Maxwell Davies’ Eight Songs For A Mad King.

But back to the accordion and the rest of the program, which featured two other pioneering works for the instrument composed by Alexina Louie and Marjan Mozetich, both commissions for CBC’s Two New Hours. Each work was originally composed for Macerollo in combination with other instruments; we heard Louie’s Refuge from 1981, performed by its original trio of Macerollo, Erica Goodman(harp) and Bev Johnston (percussion).  A new commissioned work by Anna Pigdorna, based on the mating dance rituals of birds-of-paradise, was displayed both musically and choreographically between gamin on the saenghwang and Michael Bridge on accordion. As she walked from location to location within the hall and on stage, gamin’s performance was spellbinding, completely embodying the female partner of the dance, testing and ultimately rejecting the advances of the male partner.

Equally compelling throughout the evening were the various interludes between pieces. While set changes were being made on stage in darkness, the spotlight shone on different soloists in various parts of the hall, each one in turn playing more traditional repertoire for their instrument. One highlight for me was hearing gamin play a different more nasal-sounding instrument up in the balcony, walking from one side to the other as she played. It was again like a ritual dance bringing all the ears of the hall into one focused and intimate moment. I highly recommend watching her video performances to experience for yourself her mesmerizing abilities as a performer: gamin-music.com/video.

The evening ended with a lively and upbeat tango set of pieces by Astor Piazzolla, performed by del Curto along with Tania Gill on piano and Timothy Ying on violin.