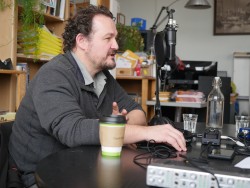 Russell Braun dropped by our studio on March 2, just back in town after his umpteenth Mendelssohn Elijah in Ottawa (around two and a half decades after a prescient Robert Cooper first picked him out of a University of Toronto student lineup to perform the role). “No-one in their 20s should do it,” he says now, with a laugh. Unsurprisingly for those who know him, with rehearsals for Louis Riel due to start March 19, he wasn’t exactly planning to rest up. Both of his sons, he told me, are heavily involved in baseball so he’s heading off the next day on a side trip to their respective spring-training camps in Florida, “en route” to London for a March 13 performance of Senza Sangue (Without Blood), a one-act opera by Peter Eötvös, based on a novella of the same name by Alessandro Baricco. His character in Senza is in his 70s, he informed us.

To hear the full conversation with Russell Braun click the play button below. For any of our other podcasts, search for “The WholeNote” in your favourite podcast app, or go to TheWholeNote.com/podcastsfor the entire list.

“In the last few years,” he mused, “my operatic career has tranformed a little bit from playing basically passionate adolescents to richly, fully developed adults.”

The upcoming role in Louis Riel, by contrast, requires him to play a character who goes from his late 20s to his late 30s. But Riel is no typical 30-year-old, and Braun has been immersing himself in preparation for the role for a couple of years now.

“I like to really do 90 percent of the work on my own with the opera, whether it’s Mozart or Debussy or Somers or Eötvös. I love the interaction between the score and the piano; luckily I can play the piano well enough to really establish a relationship with the score before I open my mouth.

“This particular score is rhythmically very, very challenging. Very often if you are a competent musician you can read through a score, and then on second, third, fourth reading master more and more. The Louis Riel score…it almost requires a mathematical analytical approach before you can even open your mouth and utter a word.…whenever a composer notates in a particular way I ask myself why. You know, whether it’s Bach, which is almost devoid of notation sometimes, or Hugo Wolf, which is extremely specifically notated, or Massenet, a French composer, also very specifically notated in terms of interpretation…I always ask myself ‘What is it that this composer compels me to do?’”

In the case of Somers, he says, “The end result that I think he wants is to eventually find a natural flow of quasi-recitative and speech again, and it’s very, very busily notated but you can reach a level of saturation quite quickly unless you have this goal in mind - that basically the result [he desires] is a natural rhythmic flow of speech: now, it looks on the score like it’s a septuplet on a triplet that has a dotted eighth and a sixteenth note underneath the triplet, within the septuplet which is actually a five-sixteenth bar [laughs]. But with difficult music the effort it takes to learn it pays off in the understanding of it.”

Interestingly, too, at the time we spoke he hadn’t permitted himself to view or listen to the one available recording of the work, featuring Bernard Turgeon as Riel, and a cast of performers who have inhabited Braun’s world, as teachers, mentors and family friends, some for as long as he can remember.

For him, there are no shortcuts to finding his character. “I need to make my own mistakes,” he says.