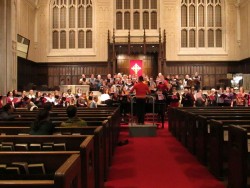 The conductor’s symposium week came to resounding end with a concert on Saturday, Jan. 26. The almost capacity audience at Yorkminster Church was treated to an eclectic collection of music and conducting styles. The confidence of the conductors increased through the week and with limited, but intensive rehearsal time, we were ready for the performance. The great humour and very animated conducting style of Xavier Brossard-Menard stands out as one of the highlights of the week.

Most live performers have experienced the sudden feeling of terror, the knot in the stomach when a cue is dropped, a lyric is forgotten, a choral entry is missed, etc. Matthew Otto, the TMC’s Associate Conductor and past participant in the symposium conducted the concert’s final piece, a chorus from Haydn’s oratorio “The Creation”. There is a point in the chorus where the tenor section is the first vocal section to resume a fugal theme (after several bars of solo voices). When rehearsing this piece at the end of the dress rehearsal, about an hour before the concert, much of the tenor section (at least I) completely missed the entry (c’mon, it was a long week). In a large choir, during a momentary lapse in concentration, you can usually count on someone around you to know what they are doing (and I was nowhere near any Elora Festival tenors, who always know what they are doing). It seems that I, and the tenors around me all had the same momentary lapse. When the chorus was done, and Matthew gave the choir a few notes, he mentioned, almost in passing, something like “oh, and the tenors will remember their entry at the end of the solos on page 28, right?”. When we did the piece in the concert, that was one entry the tenors (including me) got.

It continues to be a privilege for me to be part of the TMC (www.tmchoir.org). We get to perform the most beautiful music with the most talented musicians in the greatest concert halls. During my second year with the choir in 1984, we travelled with the TSO to New York for two days of concerts at Carnegie Hall. I called my parents in Winnipeg from a backstage phone to tell them that I finally made it to Carnegie Hall, to which they replied “but we didn’t think you practised enough”.

Public funding of arts organizations is crucial to their existence. Just as crucial is the work of volunteers and private supporters (thanks to RBC for their support of the past week’s conductor’s symposium). Most crucial for performing artists is having an audience. I urge you to support live music.  This leads me to tell you that every few weeks I change out of my TMC white tie and tails and switch from one hip style to another that better suits singing jazz at a local club. On Friday, February 22 I’ll be singing the songs of the American Songbook at the Old Mill’s Homesmith Bar it 21 Old Mill Road, Toronto.  The songlist will be sure to include songs from my favorite songwriter, Johnny Mercer. I repeat, I urge you to support live music.

Author: Sam Broverman
For a list of writings by this author, click the name above
More from this author: