Although there is a lot of focus these days on the pandemic, we are all at some level aware that lurking in the background is a much bigger issue for which there is no vaccine – the climate crisis with the threat of rising seas, worsening storms, runaway fires and more. These issues are increasingly becoming the focus for many artists of all disciplines, myself included. How do we continue working as creative people with all the impending disasters just around the corner? What relevance does the next orchestral composition or sound improvisation have in light of the issues we’re collectively facing? 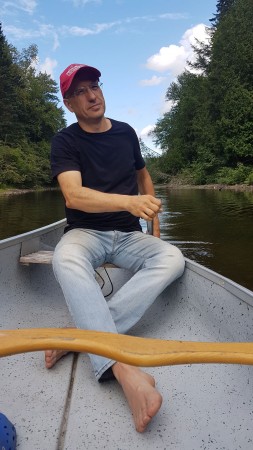 I recently approached one of my composer colleagues, Claude Schryer, whom I originally met when we were both graduate students in composition at McGill University in the 1980s, for his thoughts on all this. Schryer has been involved for years in issues related to the relationship between sound, listening, musical composition and the environment, an area that has become known as “acoustic ecology”. This particular field of ecological awareness, encompassing both artistic practice and academic scholarship, was originally born on Canadian soil out of the work of composer R. Murray Schafer and his colleagues in the World Soundscape Project (WSP) during the 1970s.

Later, in 1993, a conference was held at the Banff Centre for the Arts called The Tuning of the World, the title of Schafer’s influential book published originally in 1977. Schryer was instrumental in behind-the-scenes organization of the conference, but, as he points out to me, it was a group effort that brought about a watershed moment: the birth of the World Forum for Acoustic Ecology (WFAE) and its Canadian spin-off called the Canadian Association for Sound Ecology or CASE. 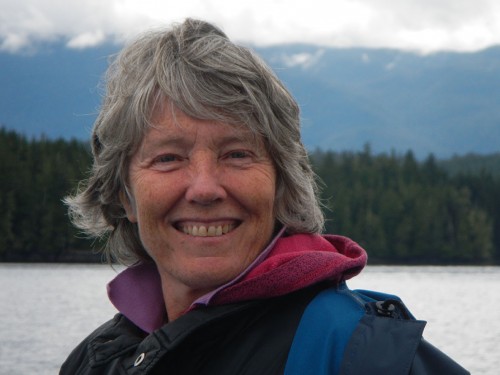 Soundscape composer Hildegard Westerkamp was one of the key members of the World Soundscape Project (WSP) in the 1970s, and during the 1980s had often mentioned the idea of a conference to Schafer, as a way of following up with all the contacts they had made over the years. It took until the 1990s, though, at the initiative of Michael Century, director of the Banff Centre’s Media Arts Division, to finally get the ball rolling. At initial planning meetings a few years prior to the festival, Westerkamp took on the creation of a Soundscape Newsletter to help bring together the far-ranging community and create an audience for a potential conference. Sent to the large mailing list that had grown over the years, the response to it was very enthusiastic, and a conference date was set for August 1993, with Calgary-based composer Tim Buell getting involved in the organization of it, along with Schryer. 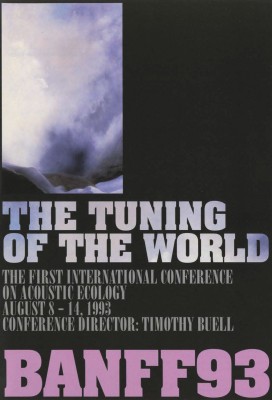 Birth of the World Forum

Throughout the conference, daily early morning meetings, facilitated by both Westerkamp and Schryer, were held to discuss the idea of creating a structure that would provide continuity and connection for those present after the conference was over, as well as for others on the mailing list. With people having travelled from the USA, Europe, Australia and of course from Canada, enthusiasm was riding high, and by the end of the week the World Forum for Acoustic Ecology had been created.

Being in the midst of a national park in the Rocky Mountains of Alberta, the Banff Centre is surrounded by an abundance of wildlife. As Westerkamp recalls, just as the vote was completed to create the Forum, a knock was heard on the window. It was an elk. Everyone laughed and agreed: “We have confirmation.”

Schryer took on the initial role of coordinator of the World Forum. Part of the vision was that different countries would create their own individual chapters, but with Canada already having a lot of momentum via the WSP, it wasn’t until 1996 that CASE, the Canadian sound ecology chapter came into being. Fittingly, the vision took shape during a world soundscape workshop held at the Haliburton Forest & Wildlife Reserve, the wilderness location where Schafer created his annual collaborative Wolf Project.

Canada has been uniquely positioned as a leader in the field of acoustic ecology and soundscape composition, Schryer says, with many Canadian sound artists and academics taking a leading role in the further evolution of the field. In 2018, during a conference in Germany celebrating the 25th anniversary of the World Forum, many participants remarked on the great impact that the WSP, The Tuning of the World and the subsequent WFAE has had internationally.

Our conversation shifted to the topic of how Schryer has taken his involvement in these organizations and awareness of environmental sound into his creative work. During his studies at McGill he learned and developed his craft of electroacoustic and instrumental composition. However his passionate interest in the combination between art and environment has been there from day one. “With my music training, I just kept expanding further into sound-related fields that were more and more broad, expanding into acoustic ecology, radio, interdisciplinary work and cross-sectoral work like arts and health. Sound has always been my base and a way for me to enter other fields and to collaborate, either with other artists or with practitioners in other fields such as scientists.”

His career as a composer and sound ecology activist temporarily came to a standstill in 1999, he says, when he took a job at the Canada Council, leading the Inter-Arts Office where he became involved in developing policy for this new artistic practice. However, in 2016 he felt the need to go back to creative work and integrate it with his practice in Zen Buddhism.

Based on his passion for meditation and stillness, he created a series of 175 three-minute audio and video portraits called simplesoundscapes (www.simplesoundscapes.ca). “I just loved doing that. I was recording interesting moments from places all around the world, three minutes of a moment that were often interesting in very minute ways.” 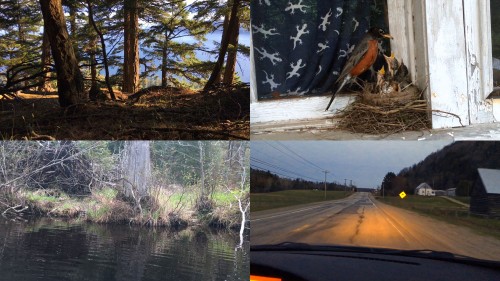 When that project came to completion in July 2019, Schryer decided to become more involved in the climate change movement “because of the obvious need for us all to be involved,” he said. He began spending more of his time, both the Canada Council and in his personal life, working at a social level on the production of environmental projects. “We need to change the way we live so let’s think about how we produce artistic events,” he says.

Then, in May of 2020, he started the conscient podcast, and during its first season he was “hungry to explore the relationship between awareness, art and environmental action.” With the second season beginning in March 2021, the conversations are now focused on accepting reality and ecological grief. “I call it a shared learning journey, educating or re-educating myself and sharing as I go.”

The first episode of season two is called reality and mixes quotations from various authors, recordings from his simplesoundscape collection, and excerpts from a 1998 soundscape composition titled Au dernier vivant les biens. Calling on his skills as a composer, this new direction has become “a journalistic project that’s about raising awareness and looking at how artists can play a larger role in what we’re calling climate emergency. It’s not just climate change, it’s a climate emergency which is part of the larger ecological crisis that includes biodiversity.”

In September 2020 he chose to leave the Canada Council so he would have time and resources to invest in projects of this nature. With conscient, he says, he can give a voice to artists and climate workers to speak about the ideas they’re developing, the concepts, theories and actions being taken. “That seems very concrete to me, and is what I’m planning to do for the rest of my life.”

Currently he’s also involved with an emerging national project called SCALE – Sectoral Climate Arts Leadership for the Emergency, a coalition of arts and climate workers doing projects internationally, exploring how the arts can play a role. “People are doing similar things in different parts of the country and now we can align our efforts and put some pressure on the decision makers, inform artists on tools that are available to reduce their footprint, and create a series of activities that will help advance the arts and cultural sector’s contribution to the climate emergency.”

And so we come back to the question that prompted me to contact him in the first place: What relevance does the next orchestral composition or sound improvisation have in light of the issues we’re collectively facing?

“There are all kinds of ways that artists, including musicians and sound artists, can contribute and it’s up to those individuals to see where they want to put their energies and where they think they’re most useful to society. Sometimes it’s in their art practice, and sometimes it’s more about the way an arts organization operates and the environmental footprint that is created. We should not be wasting anything, such as one-time use theatre sets, but we should be focusing on what’s important – connecting with people and getting the artwork out there. It doesn’t have to be about touring around the world the way that we used to. Maybe there are other ways to get the word out there. That’s where we’re at now.”

“So how do you approach the issue of our deep alienation as a society from nature and the environment?” I ask. He replies by speaking about how deep the disconnect is, “going back hundreds of years through the different doctrines and European ways of seeing the world and the idea that we control nature.”

The way we have been educated in the Western world is to take nature for granted, that it’s there to be exploited, he says. “We have to change that. We have to see ourselves as part of nature. Trauma comes up a lot in my conscient interviews. The Western world is so traumatized in its relationship to nature. It’s lost touch, it’s flailing.”

So how do we re-engage with nature? “I don’t think there’s an easy solution, other than valorizing nature, rethinking who you are, re-educating yourself, changing the systems on the longer term; and listen to Indigenous voices who have always had a relationship with nature that has been symbiotic as opposed to oppositional or exploitive.”

Take the time to listen to the people he has featured in his conscient podcasts, he suggests – “to what they are saying and the struggles they are engaged in.”

Part of the task ahead, as musicians and sound artists, is to help cultivate new artistic forms and practices that deal with the issues and require action, as we collectively face the ever-growing climate emergency ahead. 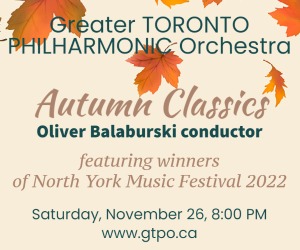