As we continually lurch our way (back) towards some form of concert life in the midst of this seemingly neverending pandemic saga, how composers and musicians find solutions remains an ongoing story of adaptation, ingenuity and perseverance.

Take the 21C Music Festival for example, originally scheduled to happen from January 15 to 29. In my last column, written for the December-January issue, I spoke with composer Cecilia Livingstone about her Garden of Vanished Pleasures, slated to be programmed at the festival. As conditions grew more dire during December, with Toronto facing a lockdown, the festival was scaled down in response, with plans shifting to a series of livestream-only concerts in place of the previously planned livestream with a limited live audience. Then, on January 14, when a state of emergency was declared in Ontario, even livestream-only concerts from Koerner Hall were precluded – a blow for them and for other music organizations in the city planning to present their livestreamed events there as well.

So now what? Another event planned for 21C I had been curious about was a concert titled FLIPBOOK: Music and Images, featuring the Glenn Gould School New Music Ensemble, which is now a free online concert scheduled for February 18. Curious to know how the plan for the event has had to change, I spoke with the ensemble’s conductor, composer Brian Current, and discovered a whole other layer of postponements and reinventions.

“It’s become an experiment in how music can be made during these strange times,” Current told me. “Now, all the players will record their parts from home and a production team will compile everything together in advance for the online event.  It will become an entire concert with everyone playing in advance from home.”

This type of concert has sprung up everywhere in the Zoom world, and true to form, what the audience will see is everyone in their little boxes on their computer screens. Current spoke of the kind of perseverance required on the part of the players to make this happen, with some performers so committed to being in the city to further their studies at the Glenn Gould School that they self-isolated for two weeks earlier on in the fall. “This is what it takes to be a musician during this COVID era,” Current remarked.

Fortunately, the chosen repertoire for the concert, mostly for large ensemble, makes it ideal for this type of event. Three of the four pieces on the program have electronic components that even in a normal concert situation would already have required the conductor listening to a click track as they conducted the ensemble. Now, the players will also perform listening to the click track at home as they make a recording of their individual parts. As Current said, “It’s a lot easier to be together as a pulse rather than a string orchestra that has to sing together, which is also wonderful, but much harder to do from home.”

Also, as the title of the concert suggests, most of the pieces on the program have a visual element, a flipbook being a small book with printed images that give the illusion of motion when the pages are flipped through rapidly.  It will be up to the videographer Taylor Long to decide on what the audience will see visually when all the recordings are compiled and mixed.  It may mean that at times the moving images will be in one of the small boxes, so Current recommends using the biggest screen you have with the best audio speakers or headphones possible. Other members of the technical crew include Pouya Hamidi (audio production) and Adam Scime (media director).

The large-ensemble pieces on the program include Nicole Lizée’s  2017 work, 8-Bit Urbex, for 15 players, soundtrack and film. Originally commissioned by the Australian Art Orchestra, this work includes drum kits, electric guitars, turntables, jazz-based instrumentation, and even the sounds of trumpets being submerged into water. Everything is synchronized with images of urban environments that appeared in video games from the 1980s and 90s.

French/Argentine composer Martin Matalon’s Las siete vidas de un gato (A Cat’s Seven Lives) is scored for the 1929 silent film Un Chien Andalou by Spanish filmmaker Luis Buñuel and artist Salvador Dalí, with electronics and acoustic instruments matching the surrealist images.  Fortunately, because performers had already spent time rehearsing the piece together during the fall, Current says they’re now ready to perform their individual parts from home. Without that rehearsal time, he says, doing it solely from home recordings would not be possible.

The large-ensemble pieces are rounded out by French composer Pierre Jodlowski’s Respire, a work created in collaboration with a dance company filming a series of images of the body. In the first half, the music is paired with images of breathing body torsos; in the second half these change to moving bodies whose trance-like gestures were inspired by watching people dancing in a club.

The fourth work on the program arose from the fact that each year the GGS New Music Ensemble has a different makeup of instrumentalists. This year, three oboe players joined the group, so Current made the decision, with support from the Royal Conservatory, to commission a work for three oboes and viola from Montrealer Corie Rose Soumah, who is currently pursuing her doctorate at Columbia University.  Her piece, Chrysanthèmes asséchés s’abreuvant d’air et d’ennuis nocturnes, captures her experience living in New York during the early days of the pandemic and is evocative, as its title suggests, of the still-life genre; it was the everyday objects she encountered during the endless repetitive days of lockdown that comforted her. The plan is to perform this work again in a future which includes live concerts.

As Current commented, this concert is a glimpse into what it feels like to be alive during this time and place in history, with concert life mirroring a world where people are already in their little digital boxes. Fortunately, the technology available to reassemble everything together makes these types of experiences possible.

A plus of the pandemic

Another advantage, if one can call it that, of this new performing adventure, is the possibility of experiencing concerts from different locations. An early February example: INNERchamber has been organizing concert events for a local Stratford audience for the past 11 years, with two musicians at the helm: artistic director Andrew Chung, violin, and Ben Bolt-Martin, cello.  Their concerts bring together performers from a myriad of musical traditions, including song, poetry performance, and improvisation.  Each event has its own unique character, with a narrative thread weaving all the elements together. Usually, audience members can take in a meal and wine before the concert begins, which creates a lively community atmosphere. 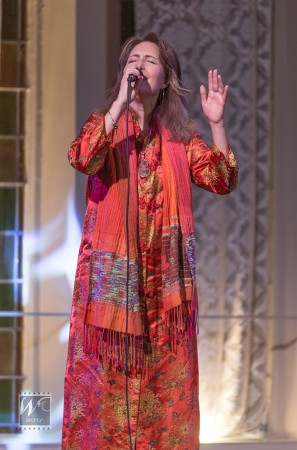 The concert planned for February 7,  titled Lost and Found, features the music of Pamela Jane Gerrand, singer and narrator, (pamelajanegerrand.com), based on her own poetry as well as the poetry of Rumi. It will also include a performance of Tōru Takemitsu’s Toward the Sea, originally commissioned in 1981 by Greenpeace for the Save the Whales campaign. Gerard Yun, shakuhachi, Daniel Ramjattan, guitar, and percussionist Graham Hargrove, will join Chung, Bolt-Martin and Gerrand.

In conversation with me, Gerrand described the concert as “an ode to this time of year that seems endless. It’s a time when we go within to find inspiration, strength and resilience.” The various pieces on the program have been chosen to help us “find solace and the experience of being found” (something I’m sure many of us can relate to right now). “We’ve lost our access points in this time of sequestering,” Gerrand says.

Gerrand’s journey as a performing artist began in theatre, gradually shifting over to songwriting when she began creating works to express the universal experience of being human – “the beauty and the pain, the connection and brokenness ... At this time, we’re all suffering from the disease of disconnection, and the warmth that comes when we sing from the heart is where we can make the ineffable known. We can blast away the illusion of separation and come into the field of love.”

She remains hopeful and determined. “During this time of forced separation, people are learning how to go within,” she said, “and connect to their emotions and vulnerabilities; and, in that process, many are finding the gift of their own creativity.” 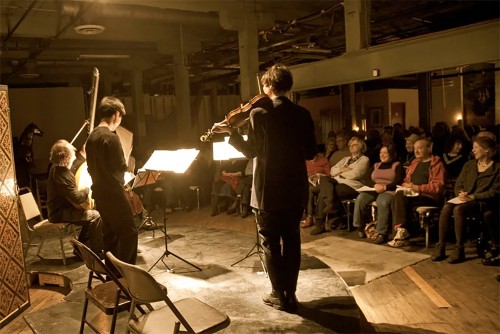 At the time I spoke with Gerrand, towards the end of January, the plan was for the concert to be livestreamed, from Revival House in Stratford, INNERchamber’s usual restaurant partner, with each of the players sufficiently distanced from each other and with the livestream captured by eight cameras. Since then the concert, like its title, has been “lost and found.” Given that the only places performers can currently perform from are TV or recording studios, it will be streamed instead from Canterbury Music Company studios in Toronto, but with Stratford-based audiences able to pick up concert day take-out meals from Revival House as usual, and tune in from there the way I was planning to tune in from here.