I’m always curious to see what the Royal Conservatory of Music’s 21C Festival will be offering each season; this year being unlike every other performance season, I was even more curious as to what we could expect from this annual offering of new sounds and the latest in contemporary music creation. I was pleased to see that the festival will be moving ahead despite the complexities of producing concerts for limited and virtual audiences. Running from January 15 to 29, this year’s offerings will be a scaled-down version of previous years, but still filled with premieres and outstanding performers, both local and from further afield.

We will hear concerts by two Toronto-based pianists: Eve Egoyan will perform pieces written for her imagined piano that combines original piano sounds with an extended software-based piano; and Royal Conservatory alumna Morgan-Paige Melbourne will perform two of her own compositions along with pieces by several other composers, including one by Brian Current, the director of The Glenn Gould School New Music Ensemble. The GGS New Music Ensemble will also have a concert of their own with several works combined with projected images. The well-loved Kronos Quartet will make a return visit with three different events to choose from. Their multimedia performance piece, A Thousand Thoughts, blends live music by Kronos, narration, as well as archival footage and filmed interviews. Kronos’ Fifty for the Future initiative, designed to create a repertoire of contemporary works for young string quartets they introduced to 21C audiences in 2016, will be the focus of a concert featuring four quartets from the Glenn Gould School after a two-day mentorship with Kronos. 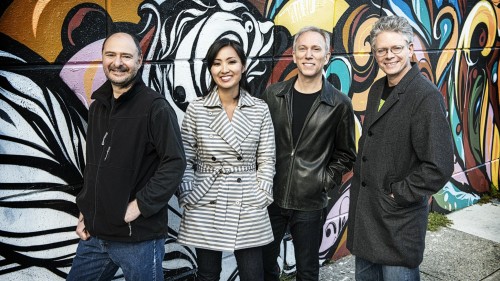 The highlight of the Kronos visit will be a concert of music from seven countries banned from entering the USA along with protest music inspired by Pete Seeger. It will be a tribute to the tumultuous and free-spirited 1960s that eventually led to the formation of Kronos in 1973.

A highlight of the festival for me will be a unique work, Garden of Vanished Pleasures, a co-production by Soundstreams and Pinkhouse Productions, currently scheduled to be performed on January 22 via livestreaming and with possible limited audience. (However, readers are advised to check ahead regarding the hoped-for live component of anything these days.) This semi-staged work will combine compositions by Canadian composer Cecilia Livingston and English composer Donna McKevitt into a new creation, conceived and directed by opera and theatre director, Tim Albery. Speaking recently with Livingston, I was able to learn more about what to expect with this new production, as well as find out more about her current projects.

To create Garden of Vanished Pleasures, Albery has interwoven a selection of songs from McKevitt’s larger work Translucence: A Song Cycle, based on the poetry of Derek Jarman, with Livingston’s arrangements of seven different pieces of her own that range from art songs to chamber music. Together, these separate pieces by both composers have been uniquely interleaved to create an original dreamy sequence, all scored for two sopranos, mezzo, countertenor, viola, cello and piano, which is the instrumentation McKevitt used in Translucence.

Since most of Livingston’s pieces that were selected were scored differently, she was asked to create arrangements so that both composers’ works could share the same instrumentation. Her Kiss Goodnight, originally for men’s choir, and Snow, originally for marimba and voice, for example, will now be heard arranged for this new combination of instruments.

How did this all work out? I asked in our conversation about the production. “I’m really quite struck by the mesh of our two voices,” she answered “It’s really interesting to experience your own work being seen by someone else in a different way than how you had understood it. I’m finding that what they have created rings very true to what’s in the pieces themselves.” Since her works were originally created without any dramatic context, she has found it particularly fascinating to see them now being drawn into this larger dramatic whole. She spoke about how both composers have a similar interest in the themes of intimacy and loss and use similar imagery in their pieces: bodies of water and night-time, for example.

The overall impact will be the creation of a fluid dreamscape world, and even though the two composer’s pieces may sound different, she was confident that there would be an organic realism to the whole. Albery will also be adding video projections to make a full artistic rendering that is also very suitable for online performance.

Writing for voice has developed into one of Livingston’s big passions, and she is currently enjoying her role as composer-in-residence at Glyndebourne Festival Opera, located just outside of London, England, in what was originally conceived as a two-year residency that has now been expanded into three, thanks to COVID. For her, this experience has been a rare opportunity to see up close how one of the top companies rehearses and puts together their programs. She was originally drawn to writing for voice through her activities as a choral singer, giving her the opportunity to meet many singers who eventually began asking her for pieces. As her career developed, writing for voice “really seemed to speak to me creatively,” she said, largely because of the role of text in the process. This was the “compositional and creative puzzle that my mind truly sparks over. I love those places where words and music come together to make meaning and emotions complicated.”

Her love of working with singers expanded into a deeper understanding of what it means to be a performer, how theatre works, and how drama is communicated through music. Many of her pieces feature libretti by Duncan McFarland whom she met when they were both fellows at American Opera Projects, an opera training program in Brooklyn. She was drawn to the richness of his poetry and the wealth of his imagery. “He also has a really deep understanding of how music and texts go together, even though he’s not a musician himself. It’s lovely to work with somebody who trusts the compositional side of the process and can make changes in response to questions.”

I listened to some of her recorded works before our conversation and was struck by Listen to the Chorus, a video installation that she was involved in. The piece was conceived by spoken-word poet Nasim Asgari and performed by four members of the art collective Madeleine Co. The video features four separated images with close-up shots of the mouths of four female performers of different racial backgrounds, their voices whispering, speaking and singing in overlapping layers. Livingston explained that the group had come to her looking for a polyphonic choral interpretation of the original text to be sung alongside the spoken word performance of Asgari. The piece is raw, provocative and direct, mincing no words about women’s experiences of violence and suppression, beginning with the phrase “I was born resisting” and, at a later point, “We are not silent, more often just silenced.” This project was the first time Livingston had been involved in creating something with such a sharp socio-political edge to it. And even though it took her out of her comfort zone at the time (2013), she had great respect for the response the piece received, which inspired her to ask questions of herself: “What stories does my work tell, and who are these characters? There is definitely now a thread of thinking about women’s experience and how that’s shared musically that runs through a lot of what I do.” 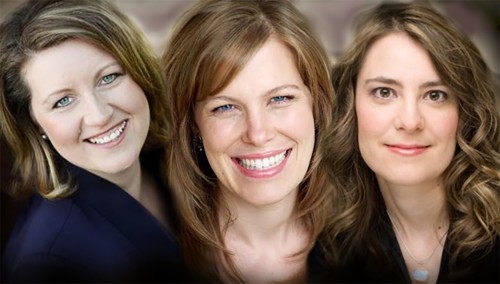 One example of that is a recently completed commission from Women on the Verge, a trio of female musicians who focus on performing works that tell historical and fictional stories about women’s experience. Collaborating with Toronto Poet Laureate Anne Michaels, this new piece, Breath Alone, is a song cycle about the type of women that classical art song rarely allows to speak. The space that is given in this piece to the lives of artist/sculptor Eva Hesse, poet Nelly Sachs and painter Paula Modersohn-Becker, highlights the fact that they were either overlooked or ignored in their own time. “This was a chance to look at real women and try to give voice to what the complexity of their experience might have been.” Livingston is looking forward to the time when it will be possible to share this work with an audience. This experience was, she said, “a crucible of realizing that these types of stories are really important to me.”

Currently, she is finishing up a new 90-minute opera, Terror & Erebus, for six singers and percussion quartet, an unusual combination for opera, commissioned by Opera 5 and TorQ Percussion Quartet. She knew the members of TorQ during their university days together, and loved the sense of theatre in the way they played. “That was the genesis for making an opera with them,” she said. “Instead of being put in the corner or a dark orchestra pit, they will be a part of the stage experience and take on the role of being characters with their physical presence being a big part of the visual spectacle.” The story is about the Franklin expedition to find the Northwest passage, and the opera’s title comes from the names of the two ships of that doomed expedition.

While composing, she imagined what the experiences of the crew might have been like, and she has approached this chilling narrative far more as an immersive dreamscape and hallucination than as a pirate-like adventure story. Scored for two sopranos, mezzo, tenor, baritone and bass baritone, this full range of sound gives lots of room for play and offers the audience the variety so necessary to sustain a long vocal work. Using the mallet percussion instruments, she is able to create a strong harmonic core. Livingston is currently putting the finishing touches to the score, awaiting the time when a performance will be possible. (We can all look forward to the flood of new creations being made during this time of isolation.time awaiting us when we are out of the dark waters of this time of isolation.

Coming full circle to the theme of unusual and original productions coming from Soundstreams, they will also be premiering a new version of their already original retake of Handel’s Messiah they call Electric Messiah, livestreaming on December 17. This version will be a full-length music video, with a mix of different outdoor filming locations, studio recordings and cinematic interpretations. The musical styles will range from jazz to soul/hip-hop and more, with a tradition-bending ensemble: soprano, treble, tenor, bass, turntables, guitar, harpsichord, electric keyboards and dancer. A new work by Ian Cusson, O Death, O Grave, will also be part of this holiday spectacle.

I end this last column of 2020 with a wish to all readers that you have a safe and celebratory holiday time, however you chose to observe it.