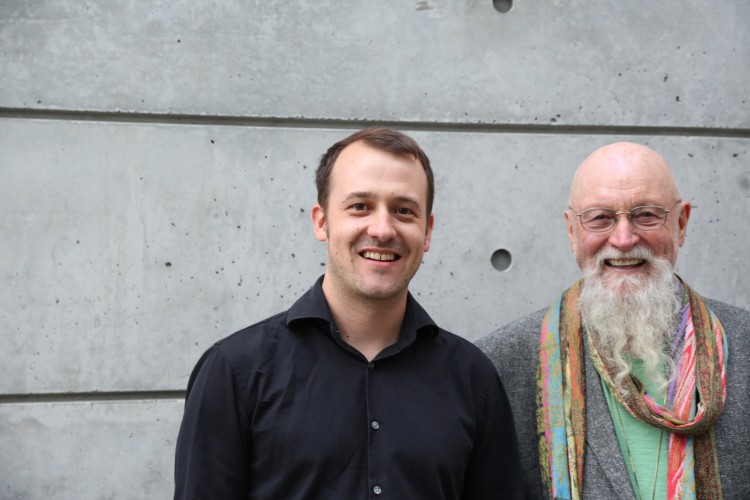 Change is not the only measure of a new music festival’s success, as witnessed by the eagerly anticipated visit to this year’s 21C of Terry Riley (now 85 years of age), an individual who for more than

60 years has helped define the course of new music.

The 21C Festival, produced by the Royal Conservatory of Music, is now in its sixth year and is, by definition, committed to presenting new sounds and ideas. That being said, opening up the flyer for this year’s 21C Music Festival was like a breath of fresh air. I couldn’t help but compare it to last year’s experience – a gasp of disbelief, even despair, when I realized that there was barely a female face to be seen or name to be read. Not so this year. The gasp this time round was more of delight, surprise and yes, relief. Finally! There is definitely a huge sea change occurring this year and for that reason alone, all the more incentive to attend and listen to what is percolating with creative innovators in music. Not only are there a significant number of works and premieres by women, but also by culturally diverse composers as well.

Another key change is the move to a January timeslot from the previous one in May, with this year’s festival happening January 16 to 20, dovetailing with the U of T New Music Festival, a short stroll away, which runs from January 16 to 27.

Change is, however, not the only measure of a new music festival’s success, as witnessed by the eagerly anticipated visit to this year’s festival of Terry Riley (now 85 years of age), an individual who for more than 60 years has helped define the course of new music.

Riley’s music has had a significant influence not only on contemporary classical composers but also on rock composers such as Lou Reed and Peter Townsend. His attitudes and approaches to music making have contributed to the radical sea change in compositional ideas and practices that began in the 1960s. He was a key player in the experimental traditions that originated in the USA which filtered across the border.

In Toronto, it was the Arraymusic Ensemble that picked up on these currents, making it a priority in their programming to feature composers who were part of that scene, including people like Morton Feldman, Christian Wolff, Steve Reich, Jim Tenney and of course, Riley himself. I had a chance to talk with Robert Stevenson, former Arraymusic Ensemble member and artistic director about his memories and experiences working with Riley and his music.

One of the big festivals that occurred throughout the 1980s in the USA, he told me, was called New Music America and in 1990 it had travelled to Montreal as New Music Across America. That year the festival organizers partnered with Arraymusic to commission a work from Riley titled Cactus Rosary. (The piece appears on Array’s New World CD released in 1993.)

Stevenson remembers well the collaborative process involved in the creation of Cactus Rosary. “Most composers in the Western art music tradition aren’t strong in collaborating. It’s not part of the tradition and you’re not trained in that when you study composition. Rather, you’re learning how to tell people what to do. When we got the score for Cactus Rosary there was hardly anything on the page. ‘Where is the music?’ we wondered. There were a few notes, some pitches, no metre. Some of the notes were whole notes, others filled in but no stems. There were no rhythmic details, no dynamics, and no explanation of the tuning system, which was in just intonation (rather than the standard equal temperament). All we had that indicated the tuning was a DX7 synthesizer patch. Once Riley began to work with us, though, you began to realize that what was on the page was there to be fleshed out. A lot of what we did is not in the score.”

Stevenson gave the example of the vocal part he performed that was more like speak-singing a text. “I started reading and he said: ‘Can you change the harmonic content by changing your throat shape? Can you move the pitch around? There’s a delay line on the voice so we should set that up.’ Everything happened collaboratively in a very subtle yet determined kind of way. It was never, ‘This is what I want.’ He was clear about what he didn’t want and gave us instructions that would lead us in a direction to what he would like without having to say anything. It’s a different approach to composition. There’s not a blueprint but an invitation to a process.”

Using just intonation tuning is an important aspect of Riley’s work. Stevenson described the difference that it made for Cactus Rosary. “At the first rehearsals the acoustic piano had yet to be tuned to just intonation, so all we had was the DX7 patch. The ensemble was tuning itself to the DX sound but with the acoustic piano in equal temperament, everything was quite chaotic. When the piano was finally tuned it was extraordinary what happened to the music. Suddenly there was this resonating thing happening – the tuning was in the air.”

The staging of the piece was also a change from the usual. “There was an old-style wingback chair that conductor Michael Baker sat in facing the audience. He played two peyote rattles which Riley acquired specifically for the piece from a Wichita tribe member who made them himself. Baker made occasional hand gestures to signal when to move to a new section, but otherwise he played these rattles, coming in and out of the piece, often when the texture was less dense. From an audience point of view, you got the sense that you were watching someone’s aural meditation being made manifest, an internal experience being made external.”

Array took the piece on tour when they visited Europe spanning the years 1993 to 95. “That’s when the piece really started to take shape,” Stevenson said, “and the duration shifted from 33 minutes to close to 50. It became more expansive and we developed the trance meditative aspect. Tour organizers in Europe didn’t want Array to come and play European music, they wanted music they didn’t have a chance to hear. They went nuts over things like the Claude Vivier music we played and with the Riley piece, we were a big hit. People went crazy and were trancing out. They didn’t have many people in Europe who were authentically connected to the music who could play it.”

At the time in Toronto, there weren’t other groups performing his music, except his classic hit In C, which was much more of a communal experience for open instrumentation. Stevenson himself played that piece several times, often with people from Array, and once at a concert by New Music Concerts at The Copa, a massive dance club in Yorkville whose heyday was in the 1980s. In C appealed to some performers because of its collaborative nature, and it was devoid of the extreme demands made by composers like Boulez and Stockhausen, for example. With any number of ways to play it and the outcome undetermined, players could relax and enjoy the moment. “This type of process was very new to people at the time.” 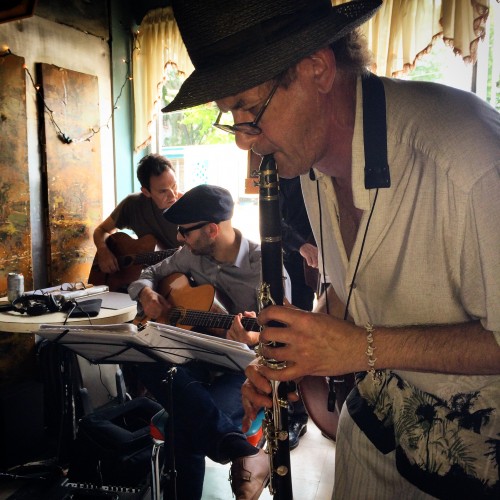 Stevenson concluded our conversation by saying that “Riley had a light touch. Nothing was too serious or worth breaking a sweat about. That’s why it was easy to collaborate with him. He wasn’t stuck on an idea but rather always asked, ‘What do you want to do?’ He was always confident that things would be accomplished and I never got the idea that he was dissatisfied with how the process was going.”

The January 18 21C concert celebrates Riley: On the first half of the evening, Tracy Silverman on electric violin will perform excerpts from Riley’s Palmian Chord Ryddle and Sri Camel, both arranged by Silverman. On the second half of the evening, Terry and his son Gyan will perform five of his works including Mongolian Winds and Ebony Horn, along with selections from Salome Dances for Peace.

Surrounding that January 18 Riley celebration concert, there is much else to enjoy in this edition of 21C.

The opening concert on January 16 features the Toronto Symphony Orchestra conducted by Tania Miller and Simon Rivard. Since there will be no New Creations Festival at the TSO this year, this is one way for them to continue to support the work of contemporary composers.

Their 21C concert features two world premieres – one by Emilie Lebel (who has been appointed the TSO’s new affiliate composer) and the other by Stewart Goodyear. (Goodyear will also be performing in a full concert of his own works on January 17, including Variations on Hallelujah and other takes on various pop and rock songs.) Other composers featured in the TSO concert are Dorothy Chang, Dinuk Wijeratne, Jocelyn Morlock and Terry Riley.

Other Toronto-based presenters offering programs at this year’s 21C festival include Continuum with an all-female program featuring compositions by Cassandra Miller, Monica Pearce, Linda Smith, Carolyn Chen, Unsuk Chin and Kati Agócs. On the weekend, the performing ensembles of Cinq à Sept and Sō Percussion (both on January 19) as well as the Glenn Gould School New Music Ensemble (January 20) will be performing entire programs of new compositions, again featuring an abundance of works by women. Check the listings for a full rundown of all the composers you can hear.

Esprit bridge to U of T

As mentioned previously, the U of T’s Contemporary Music Festival picks up where 21C leaves off. On January 20 there will be an Esprit Orchestra concert which, fittingly, closes one festival and opens the other with works by Claude Vivier, Toshio Hosokawa, Alison Yun-Fei and Christopher Goddard. The two festivals are partnering to present the North American premiere of Hosokawa’s Concerto for Saxophone and Orchestra, performed by Wallace Halladay. Hosokawa is Japan’s pre-eminent living composer, creating his musical language from the relationship between Western avant-garde art and traditional Japanese culture. His music is strongly connected to the aesthetic and spiritual roots of the Japanese arts and he values the expression of beauty that originates from transience.

Hosokawa, who is this year’s Roger D. Moore Distinguished Visitor in Composition at the U of T Festival, will also be offering composition masterclasses on January 21 and 22, and his music will be presented in a concert by faculty artists on January 21, in a concert of Percussion and Electronics on January 23 and as featured composer for the New Music Concerts performance on January 25.

In with the New Quick Picks

DEC 11, 7:30PM: Gallery 345. PAPER: New Compositions and Improvisations by Nahre Sol, a pianist and composer who creates music that combines a unique blend of improvisation, traditional Western form and harmony, jazz harmony and minimalism. She teams up with clarinetist Brad Cherwin for this free concert.

DEC 14, 8PM: Music Gallery, Rejuvenated Frequencies. A showcase of music curated by Obuxum featuring groundbreaking music by women of colour, music that is “progressive and healing all at once.” Performers include VHVL from Harlem with her thumping beats and bright melodies, Toronto-based YourHomieNaomi with roots in spoken word, and Korean-born, Toronto-based classically trained pianist Korea Town Acid whose DJ sets create an avant-garde journey.

JAN 17, 7:30PM: Canadian Music Centre. A mixed-genre evening of jazz-inflected works by Alex Samaras, one of Canada’s leading jazz vocalists, and Norman Symonds, a leading figure in the third-stream movement in Canada that combines jazz and classical forms. The concert will include works by the CMC’s 2018 Toronto Emerging Composer Award-winner Cecilia Livingston, who specializes in music for voice and opera.

JAN 29, 7:30PM: Tapestry Opera presents Hook Up at Theatre Passe Muraille. This opera by composer Chris Thornborrow, libretto by Julie Tepperman, raises questions of consent, shame and power in the lives of young adults navigating uncharted waters on their own. Content warning: Contains explicit language and discussion of sexual violence. Runs to February 9.