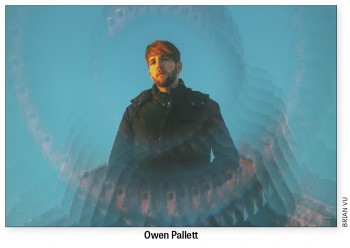 In last month’s column, my opening story focused on the upcoming New Creations Festival presented by the Toronto Symphony Orchestra, with concerts on March 4, 8 and 11. I featured a conversation with Christine Duncan speaking about a new commission entitled Qiksaaktuq for the March 4 concert, a collaboration between Duncan, Tanya Tagaq, Jean Martin and orchestrator Christopher Mayo that combines both notated score and improvisation. To continue coverage of the New Creations Festival for the March issue, I spoke with guest curator and composer/performer Owen Pallett about his vision for the festival and the highlights of the March 8 and 11 concerts.

A year ago, a review by Michael Vincent in the March 6 edition of The Toronto Star noted that in the 2016 New Creations Festival there were no female composers featured. The author stated that this omission demonstrated “a lack of awareness towards the diversity of the community,” and he ended his review with a hope that the TSO would listen to this critique. By selecting Owen Pallett as the guest curator for this year’s festival, I think it’s fair to say that they are now listening. When I spoke with Pallett, I began by asking him what his curatorial vision was. “My priority is on critical work,” he began. “There has been a big change in the [cultural] conversation over the last 15 years, and I want to reflect that in the concerts.” For Pallett, this means having representation from both female and male composers, as well as the inclusion of Indigenous and culturally diverse performers. He also wanted to reflect the full spectrum of new music practices that exist outside the traditional concert hall. This goal is evident in both the selection of composers he wanted to include, as well as the choice of performers for the lobby concerts that happen both pre- and post-concert. “There’s an enormous audience in Toronto for new music, but they don’t know it exists. People are interested in listening to challenging music, and I’m also working to address that in this series.” In the end, Pallett is not interested in theoretical ideas of what new music is, but rather in selecting works that are, in his words, BOLD.

As examples, he cites the music of Cassandra Miller that displays “enormous and monolithic gestures, like giant glaciers, which are far removed from other schools of new music composition.” Speaking of glacial landscapes, another composer Pallett selected is Daniel Bjarnason from Iceland who takes Ligeti’s ideas of cloud structures and turns them into a new language. Both Bjarnason and Miller’s works (Round World and Emergence, respectively) will be premiered on March 11. Pallett’s choice to include Tanya Tagaq’s improvised performance will give audiences a chance to experience “the most emotional response you’ll hear from an improvised performer.” Another of his composer selections is American Nico Muhly (Mixed Messages, March 8 concert), whose style is a “concentrated John Adams-inspired tonalism drawing from many different sources and time periods.” Muhly, currently one of the most visible composers in the USA, has worked and recorded with a range of classical and pop/rock musicians and refuses to be pinned down to one specific genre.

Pallett’s own commissioned work, Songs From An Island, will be premiered on March 8. What we will hear that night is a 15-minute excerpt from a 75-minute work he is currently working on. Originally, Pallett began writing a more conventional piece for the festival, but after recently hearing American composer Andrew Norman’s work Play, he decided to shelve it and go full out to create a more edgy piece that “investigates the cross section of folk songwriting and the aspects of modern orchestration that I’m most interested in.” The piece is a series of songs about a man who washes up on an island and gets involved in an assortment of hedonistic activities. One might think that would result in a work with a bawdy flavour, but not so. Rather, Pallett says, the piece has a more spiritual tone and ends with the character circling the planet hearing the prayers of the people below. The music is as much inspired by trends in rock music since Talk Talk, an English new wave band active from 1981 to 1992, as it is by concert music influences such as Ligeti-inspired tone clusters and Grisé’s spectralism. However, Pallett made it clear that his is not a hybrid music as he “draws equally from a number of different languages to arrive at this one unified aesthetic, one unified conclusion. I’m still trying to find the sweet spot,” he said, which is not a space “between the two worlds, but is its own place unrelated to either genre. I am completely allergic to any conversations that distinguish between pop vs. serious music. I find it classist and I reject it.”

The Festival will also feature a lineup of outstanding performers, including violinst James Ehnes performing a new violin concerto by Aaron J. Kernis (March 8) and the Kronos Quartet performing Black MIDI, a new work by Nicole Lizée (March 11). And finally, each symphony concert will begin with the performance of a two-minute Sesquie, commissioned as part of the TSO’s year-long Canada Mosiac project. These include Andrew Staniland’s Reflections on O Canada after Truth and Reconciliation (March 4) Harry Stafylakis’ Shadows Radiant (March 8) and Zeiss After Dark by Nicole Lizée (March 11). Highlights of the lobby concerts include Indigenous performers The Lightning Drum Singers led by Derrick Bressette (March 4), and the Cris Derkson Trio with Derkson on cello, Anishinaabe Hoop Dancer Nimkii Osawamick and drummer Jesse Baird (March 11). The spirit of improvisation will make an appearance as well with the performance on March 8 by the Element Choir led by Christine Duncan.

Nicole Lizée: March 11 will be a busy night for composer Nicole Lizée with her two works at the New Creations Festival along with a piece she composed for a concert featuring the Plumes ensemble at the Music Gallery. Montreal-based Plumes is a six-member group combining pop and classical influences who have invited 13 composers to create pieces inspired by Vision, Canadian producer/singer Grimes’ album. And in the spirit of Owen Pallett’s vision for New Creations, this concert includes a majority of women composers as well as a creative mandate to push genre boundaries. Alongside Lizée, other composers include Emilie LeBel, Tawnie Olson, Monica Pearce and Stephanie Moore. (And later in the month at the Gallery, the all-female Madawaska Quartet along with harpist Sanya Eng and guitarist Rob MacDonald create an immersive performance environment in which to perform works by Omar Daniel, Andrew Staniland, Scott Good and Yoko Ono. This program will also be performed on March 29 in Kitchener as part of the Kitchener-Waterloo Chamber Music Society series.)

Full Spectrum: March continues with a full spectrum of new music events. On March 10 and 11, The Toronto Masque Theatre presents The Man Who Married Himself composed by Juliet Palmer with libretto by Anna Chatterton and choreography by Hari Krishnan. The story is an intriguing one, given the gender issues already discussed. It’s an allegory of the inner battle between male and female parts, played out by the main character who rejects the idea of marrying a woman and instead creates a lover for himself from his own left side. The outcome of that experiment unfolds throughout the piece.

Continuum Contemporary Music’s lineup for their March 25 “Pivot” concert of works by emerging composers is another example of a more diverse representation of composers. The concert will present the creative outcomes of a six-month mentorship with works by four female composers (Rebecca Bruton, Maxime Corbeil-Perron, Evelin Ramon, Bekah Sims) and Philippine-born Juro Kim Feliz. Montrealer Beavan Flanagan rounds out a program of pieces exploring acoustic, electroacoustic and acousmatic traditions.

And finally, the Array Ensemble will perform “The Rainbow of Forgetting” in both Toronto (March 9) and Kingston (March 10) with compositions by Mozetich, Catlin Smith, Komorous, Sherlock, Bouchard and Arnold.

With so much going on also in the early part of March, I have not been able to cover it all here. I recommend you consult my February column for some of the early March events mentioned there.

Finally here are some additional Quick Picks for this month:

Mar 8: U of T Faculty of Music presents “A 90th Celebration of John Beckwith” featuring Beckwith’s works A Game of Bowls, Follow Me and a selection of songs.

Mar 12: Ritual 7 presents “The Announcement Made to Mary,” a miracle play with score by Anne Bourne.

Mar 25: Guitar Society of Toronto presents Duo Scarlatti. Their exact program is unknown at press time but will be selected from music from the high Baroque and 20th century works by Bogdanovic, Pisati, Iannarelli, Cascioli and Del Priora, among others.

Mar 26: U of T Faculty of Music presents “There Will Be Stars: Music of Stephen Chatman,” which includes works by Chatman, Ramsay, Parker, Hagen, and Brandon.