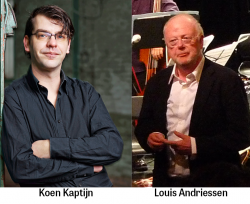 Back in the December 2013 issue of The WholeNote, I wrote about the developing collaboration amongst new music presenters in Toronto.  This desire to build community and mutual support gets a big boost in early April when the Music Gallery, Continuum Contemporary Music and Arraymusic team up to present “Gaudeamus: Deconstructed and Reconstructed.”  To understand more about the significance of this Dutch-Canadian contemporary music summit, it’s important to look at the legacy of the Gaudeamus Music Week in Holland.

Right after World War II in 1945, a yearly festival and competition for new music was held in a village called Bilthoven, located near Utrecht. Imagining what Holland must have been like emerging out of the war, I find it remarkable that not only was a festival created to promote Dutch composers in such a climate, but that also it was named “gaudeamus” – from the Latin phrase gaudeamus igitur, meaning “Therefore let us rejoice.” The title of a popular academic song performed at university graduation ceremonies in many European countries since the early 18th century, the phrase is in the same spirit as carpe diem (seize the day) with its exhortation to enjoy life.  So the Gaudeamus festival is a celebration, an invitation for hope, renewal and rejuvenation, an antidote to the fear and terror of the war years. The Gaudeamus Music Week eventually opened up to include international composers and has now become one of the premiere forums for presenting the latest developments in the global contemporary music scene. The prestigious Gaudeamus competition is open to composers under 30 with the prize money going towards a commission for a new work.

And now this spirit makes its way to Toronto bringing together members from the Continuum and Arraymusic ensembles with several Dutch musicians to present two nights of concerts at the Music Gallery.  On April 3, Gaudeamus will be “Deconstructed” during two sets of improvised music featuring both Canadian and Dutch improvisers.  Part of the evening will feature three comprovised works by Holland’s Michiel van Dijk and Koen Kaptijn, along with Canada’s Allison Cameron.   And in case you aren’t familiar with the term “comprovise,” it refers to a mixture of composed and improvised material and is the name of an American music series in the Boston and New York areas that aims to avoid or shatter genre barriers and explore the boundaries between composition and improvisation. Sounds like a perfect goal for a night of deconstruction.

Then on April 4, Gaudeamus is “Reconstructed” again with composed works by composers who have either won the Gaudemus award or had pieces selected to be performed at the festival.  The lineup includes Louis Andriessen and Yannis Kyriakides from Holland and eldritch priest and Michael Oesterle from Canada. Louis Andriessen who turns 75 this coming April, is one of Holland’s most celebrated composers.   Back in the 1970s, he turned minimalism upside down with his radical musical responses to American experimentalists Reich, Riley and Glass. He challenged these composers’ trance-like states with a European sense of edginess and angularity, creating powerful and aggressive results. Toronto audiences will be able to hear his high-voltage piece Hout, a work that embodies his trademark style of combining the rigours of complex chromaticism with rhythms derived from jazz and pop.  The “reconstruction” continues with Cyprus-born composer and sound artist Yannis Kyriakides’ piece Tinkling, which is based on Thelonius Monk’s Trinkle Tinkle.  Kyriakides left his native Cyprus to live in Holland and study with Andriessen and no doubt was influenced by Andriessen’s embracing of jazz influences. Kyriakides is also drawn to interdisciplinary combinations of musical forms and digital media, as is Canadian Michael Oesterle who will present a newly commissioned work.  Rounding out the evening will be a piece by Canadian composer, sound artist and author eldritch priest whose interests lie in sonic culture and experimental aesthetics.

Another feature of the Gaudeamus summit will be a roundtable conversation during the late afternoon of each evening’s performance to discuss whether there is still such a thing as a local sound identity, given that we can all be so instantly connected in the wired world.  These conversations will include a collection of musicians, composers, programmers and a sociologist to weigh in on the topic. And finally, if you’d like an opportunity to play with some of the visiting Dutch improvisers, a free workshop with members of Trio 7090 will be happening at the Music Gallery on April 5, from 10am to 1pm.

New Opera:  There is a new voice for contemporary opera arising on the scene, and its name is FAWN. Collaborating with emerging composers to create contemporary chamber operas, the opera and new music collective will be presenting excerpts of two of their produced operas by David Foley and Adam Scime, along with a new work by composer Cecilia Livingston on March 14.  This concert is part of the Emergents Series at the Music Galley curated by saxophonist Chelsea Shanoff. Adding to the experience of FAWN’s repetoire will be a selection of compositions by Michael Vincent, who is also writing an opera for FAWN’s upcoming season. One characteristic of this new company’s vision is to foster and support emerging musical and visual Canadian artists. Their “Synesthesia” concerts offer previews of new works in local art galleries.

And then there is Tapestry which has been championing new Canadian opera for over 30 years. On April 4 and 5, they will be collaborating with Volcano Theatre in a showcase of work titled “Explorations” combining theatre, opera and dance.  Volcano is known for their physical energy and vision of creating work that explores identity, politics, history, and the contemporary human condition.  With both FAWN and Tapestry, we are witnessing another example of genre expansion through the fusion of opera with other artistic sensibilities and forms.

Arditti String Quartet:  New Music Concerts and Music Toronto present the Arditti String Quartet on March 20.  Well-known for their spirited and technically refined interpretations of contemporary and earlier 20th century music, the contemporary string quartet repertoire would be unimaginable without them. The program includes works by some of the most venerable composers of our times, Elliott Carter, Hilda Paredes, Brian Ferneyhough and Helmut Lachenmann, each of which is part of their standard repertoire.  Carter’s String Quartet No. 5 is a perfect example of his signature technique of metric modulation, which can be described simply as a change in pulse rate or tempo where each of the two tempos have a shared relationship, rather than a sudden shift.   Hilda Paredes, originally from Mexico, wrote her second quartet “Cuerdas del Destino” in 2007-08, dedicating it to the Arditti Quartet.  Brian Ferneyhough, the master of the “new complexity,” wrote his Dum Transisset Quartet in 2006-07; it has been widely performed and recorded by the quartet.

March 16 and 18: Talisker Players: “Creature to Creature: A 21st-Century Bestiary.”