When September rolls around, there can be a feeling of anticipation in the air. It’s often a time of new opportunities, change and a chance to expand your horizons. And in this column, which is dedicated to the “new” in musical practice, there’s no better place to begin than with the Guelph Jazz Festival, running from September 4 to 8. Over the last 20 years, the festival has blossomed into a “vital social-purpose enterprise” with an artistic mandate rooted in the vision that musical improvisation provides a model for creating social change and building successful communities. This vision is also the driving force behind the innovative research project “Improvisation, Community and Social Practice” headed by Ajay Heble, artistic director of the festival. 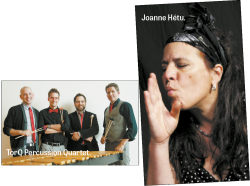 Recently, this project just got a huge boost. It was the recipient of a substantial grant to launch the International Institute for Critical Studies in Improvisation at the University of Guelph. And to celebrate, the Guelph Jazz Festival will present an opening concert on September 3, featuring a special one-time improvising percussion quartet of four stellar musicians combining jazz, new music, free improv and world music traditions. This “World Percussion Summit” is yet another demonstration of what makes the festival so special and magical — expanding the meaning of jazz to include creative improvisation from across the musical spectrum. In this column I will be highlighting those concerts which fuse creative improvisation and composition.

A perfect example is a solo performance on September 5 by Matt Brubeck, a composer and performer trained in classical music and raised on jazz, who currently brings his focus on the improvising cello into dialogue with a variety of other musical traditions. Matt will also join Australian composer and saxophonist Sandy Evans in her “Indian Project” concert on September 4 contributing to the musical conversation between jazz and Indian music. On September 6, two of the performers from the opening night event — virtuoso percussionists Hamid Drake (USA) and Jesse Stewart (Ontario) — will reconvene to provide a free-ranging mixture from their eclectic backgrounds. Stewart is a well-loved favourite of the Guełph festival, and for this year’s 20th anniversary, he has composed a lengthy work for the Penderecki String Quartet to be performed on September 8 in duet with himself at the drum set.

Ensemble SuperMusique from Quebec will present its group composition entitled “Pour ne pas désespérer seul” (Not to Despair Alone) on September 7. This diverse group began initially in 1998 with founders Joanne Hétu, Danielle Palardy Roger and Diane Labrosse, and has evolved into an extensive community of musicians combining large group composition, improvisation and “musique actuelle” with multi-media theatre, dance, and songs. Their artistic practice of group improvisation is definitely in step with the broader social vision of the festival, as they see themselves standing in solidarity with communities arising from the anti-globalization movement and the use of social media.

Other festival events of interest to readers of this column include the Colloquium (September 4 to 6), and Nuit Blanche with its dusk-to-dawn events beginning on the evening of September 7. This year’s colloquium provides a wonderful opportunity to dive deeper into the themes of musical improvisation, pedagogy, social justice and activism, through a series of lectures, keynote addresses and workshops by festival artists. Nuit Blanche events include performances by members of SuperMusique — Derome/Hétu and Freedman/Caloïa (12am); Vancouver’s Birds of Paradox exploring elements of jazz and western music with traditional Chinese and Indian music (2am); a Pauline Oliveros tuning meditation (3am); the Ondine Chorus combining improv with scored music (3am) and Grossman/Brubeck interpreting baroque music (4:30am).

And if your free spirit is longing for more, there will be an opportunity on September 28 at Toronto’s Music Gallery to hear from some of the elder statesmen and scene builders of free improv music: USA saxophonist Larry Ochs playing with drummer Don Robinson, followed by Toronto-based poet and “soundsinger” Paul Dutton performing with percussionist Joe Sorbara, known for creating orchestral textures from found objects.

This summer, I had the opportunity to experience what is known as the “eight-octave voice” at the Roy Hart International Artistic Centre located in southern France. This vocal legacy of connecting voice with the inner workings of the psyche stretches back to the early 20th century and the work of Alfred Wolfsohn. In the 1960s this vocal research evolved into a theatre-based artistic practice by one of Wolfsohn’s pupils, Roy Hart. As part of my column during this upcoming season, I’ll be making some links between what inspired me during my time at the Roy Hart Centre and the musical events of our local community.

Since the voice is the most obvious link, I’ll begin with the upcoming Soundstreams concert on October 1 in which they will be presenting two epic choral and orchestral works by the masterful Estonian composer Arvo Pärt. One of these compositions is titled Adam’s Lament, thus plunging us headlong into the territory of one of the most potent myths of the Western world — the story of Adam and Eve. As part of my residency at the Roy Hart Centre, I attended the Myth & Theatre festival which was like being submerged into an alchemical pot stirring the voice together with choreographic movement, image, spoken word and philosophical ideas.

Stories shape us and the institutions of our culture beyond what we might imagine. Initially we create the stories, and then the stories turn around and create us. And certainly this story of Adam and Eve has been one that has determined so much of our collective history. Pärt’s composition begins with the expression of grief at being expelled from Paradise and then expands further into a meditation on the sorrows of all humankind. His music is often referred to as music that comes out of the silence, creating possibilities to hear a different voice. Perhaps this other voice could be a re-examination of this myth itself. Must we collectively continue to hold onto the idea of separation, or can we create a voice, a story that brings us closer to the dream of human connection and peaceful co-existence?

Other works in the program include Pärt’s L’abbé Agathon, which recounts the legend of a fourth-century hermit tested by an angel in disguise, and pieces by two other composers, Riho Maimets and James Rolfe. Choir 21, a local group that specializes in performing contemporary choir music, will be performing alongside a string orchestra conducted by Pärt’s Estonian colleague Tõnu Kaljuste.

And now to opera — the perfect alchemical pot for combining mythic themes with music. Tapestry Opera will be offering up the latest round of opera briefs created at this years Composer-Librettist Lab, an annual gathering that teams up four composers with four writers to create, literally overnight, a series of short opera excerpts. Running from September 19 to 22, this event gives you the opportunity to hear what stories and sounds have risen up in the midst of this hothouse of creativity.

It’s hard to imagine that 100 years ago, experiencing strong rhythms and percussion music in the concert hall was scandalous. The music of Igor Stravinsky helped to change all that. Valery Gergiev and the Mariinsky Orchestra from St. Petersburg are returning to Roy Thomson Hall on October 6 to perform the three groundbreaking ballet scores Stravinsky composed between 1910 and 1913: The Firebird, Pétrouchka and The Rite of Spring. Fortunately, that concert will be in the afternoon, giving enough time to attend the evening concert curated by Austin Clarkson for New Music Concerts. You can read and listen to more on this meeting of Wolpe, Webern, Feldman and Cage in both the printed and online editions of The WholeNote.

Music Gallery and Burn Down The Capital: Julianna Barwick,
with Christine Duncan and Castle If at Double Double Land. September 26.

Wendalyn Bartley is a Toronto-based composer and electro-vocal sound artist. Contact her at sounddreaming@gmail.com.