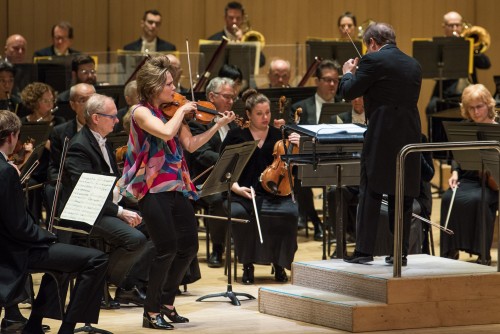 The opening night of the Toronto Symphony Orchestra’s (TSO) concert featuring Sibelius’ Symphony No. 2 was a blisteringly cold night that might have kept some people home – but the energetic playing of each piece, led by conductor Ludovic Morlot, filled Roy Thomson Hall with an interesting selection of music. While all three pieces were written within a 30-year window, that’s where the similarities (and any chance of cohesion in the program) ended.

The music at the January 10 show was well performed, despite the distinct thematic differences between the three composers’ works that caused the whole evening to feel a bit disjointed. Beginning with Kurt Weill’s Kleine Dreigroschenmusik (Suite from The Threepenny Opera), the scaled-back orchestra executed the 1920s numbers with great energy. Each of the eight movements seemed more memorable than the last, with the closing “Threepenny Finale” shining brightest of all. Of the musicians onstage for the suite, by far the most entertaining to watch was the accordionist, Joe Macerollo, whose enthusiasm for the music was contagious and reminded me of my own childhood spent messing around with the old accordion my grandfather kept in his basement. While this personal connection was nice enough, the liveliness of the overall performance was heightened when the accordion was joined by the guitar, each complementing the other to create a light and playful sound that stood out from the rest of the orchestra. The Weill suite was a joyous way to begin the evening – although it didn’t set the tone for the following pieces on the program.

Following the Weill selection was Igor Stravinsky’s Concerto in D Major for Violin performed by Leila Josefowicz, accompanied by a larger group of TSO musicians. The suite began quickly and sharply – a quick change from the showtunes-reminiscent Weill work that had been performed mere minutes before. After the initial musical whiplash, Josefowicz commanded attention as the clear lead of the piece, her sharp movements and emotive facial expressions outweighed only by her masterful playing. She demonstrated a clear ability to perform a technically very difficult piece, at times stomping her foot as if grounding herself within the music’s jarring, striking rhythmic patterns. The orchestral accompaniment shone alongside Josefowicz’s playing, bringing tension to the first two movements and later softening into a more haunting, sad sound in the third before rising back up in speed and force for the fourth movement. The dramatic pressure heard throughout the piece set an interesting tone to head into intermission – though, given the difference in style between the Stravinsky and Weill, it did little to prepare for the third and final work of the evening.

Following intermission, the piece for which the night was named was given its moment to shine in the spotlight – and, as both the longest and most epic-sounding performance of the three, it absolutely did just that. Throughout Jean Sibelius’ Symphony No. 2 in D Major, Op. 43, it seems clear that the composer wanted each section of the orchestra to have enough time to show off their expertise, and Morlot did not waste that opportunity while conducting the TSO. The strings made the absolute most out of Sibelius’ gorgeous, sweeping melodies, sounding like something out of a fantasy movie’s score. There was also a great layered sound to the violins, without real emphasis on harmony. Even when playing all the same notes, they took on the same type of sound a choir might; it suited the repeating melody well, as the simple line remained just as exciting to listen to on its sixth round as it had on the first.

Both the brass and woodwinds were able to hold their own against the strings’ massive choral sound, although at times the softer woodwinds section was noticeably quieter. The lone timpanist was great to watch and his control over the mallets while performing drumroll after drumroll was impressive, adding crucial drama to the symphony. While the tone of the Weill suite carried a 1920s Broadway sound, and the Stravinsky concerto inserted pressure, the performance of Sibelius was cinematic and elegant. If not a movie, then the huge sound of the orchestra during Sibelius’ repeating melodies was reminiscent of the climactic moment in an operatic aria, and for that reason it was the most memorable part of the evening.

The music selection during the January 10 performance wasn’t very cohesive, which affected the transitions between pieces. During each piece there was a story being told, but the lack of definition for the evening as a whole meant that there was a bit of musical whiplash each time the orchestra began to play a new composer’s work. The music was directed and performed as well as it could have been; the lack of continuity instead came from the varied and seemingly random selection of music chosen. It leaves the impression that having a wide range of styles included in a single program doesn’t always seem to work in favour of the audience, regardless of who performs or conducts it, and no matter how beautiful each piece sounds on its own.

The Toronto Symphony Orchestra presented a program of Kurt Weill’s Suite from The Threepenny Opera; Stravinsky’s Concerto in D Major for Violin; and Sibelius’ Symphony No.2 in D Major, Op. 43 on January 10, 2019, at Roy Thomson Hall, Toronto.

Isabella Perrone is a graduate of Ryerson University’s Journalism program who currently freelances for BroadwayWorld Toronto and Opera Canada. She is excited to be a member of the 2018/19 Emerging Arts Critics Program.