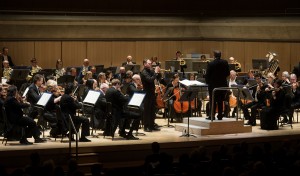 Music, one suspects, could take an audience travelling through time and space. It captures sentiment, it encases zeitgeist, and it embodies so much truth for those who are passionate about it. On the evening of January 25, when I settled in for “Holst The Planets” at Roy Thomson Hall, the musician-laden stage seemed to me like a full-fledged starship bridge. Within two hours’ time, a mundane life could be decanted and fermented; the imagination could be set free to relish every moment in the past, present and future.

It started with the Canadian premiere of the 12-minute Funeral Song. For 106 years the piece had been lost, after its first and only performance in 1909. After years of searching, the sheet music was miraculously rediscovered in the archives of the St. Petersburg Conservatory.

“There is not one living person who had this music performed…” said Valery Gergiev, who conducted its modern premiere in 2016. Despite the vicissitudes of the past century, the music itself remains intact, free of dust or rust: it opens with the murmuring double bass, soon joined by dark tones in the brass and woodwinds. Solemnly heavy, it reveals Stravinsky’s sorrow – that of a student’s towards his beloved teacher, Nikolai Rimsky-Korsakov’s, death. The strings amplify his lament, sustained by the lowest instruments of the orchestra, with piercing flutes afloat overtop. At one point, a tribute to Rimsky-Korsakov’s chromaticism starts to weave in and out; Storgårds handles it with subtlety, as if he is speaking in the language of music with the two Russian maestros. During the standing ovation following the piece, Storgårds held the full score in his hand and saluted the audience, and I saw in him and the orchestra a sincere fulfillment at having retrieved the lost gem – an expression almost like faith.

John Estacio’s newly-composed Trumpet Concerto, featuring TSO Principal Trumpet Andrew McCandless, followed. The first movement, “Triton’s Trumpet,” begins with a misty sea of strings, in which the opening ascending trumpet melody stirs up the brutal waves of a storm. McCandless captures all of these changes in texture, with a rendition that possesses some romantic softness. In an introductory online video about the piece, McCandless says of the second movement “Ballad”, “…it reminds me of the kind of music that might be playing as you sit in the planetarium on your back, gazing at the ceiling to see the stars.” The last movement, “Rondo”, with flashbacks of the first, is vigorous and vivid – like a Flamenco fan being flicked open and shut, with notes running along the folds.

Then Holst’s The Planets takes off. Written to capture the astrological character of the planets, this suite can be considered a precursor to cinematic sci-fi music composition. With Storgårds’ precision and tastefulness, “Mars, The Bringer of War” is full of vital force and energy. The strings, playing col legno (using the wooden part of the bow to strike the string), bring a crisp clarity to the menacing opening. The fanfare soon follows, and ignites a jumping flame. Then in the second movement, “Venus, The Bringer of Peace,” all the musicians quickly immerse themselves in supreme tranquility and sweetness. The contrast is beautifully executed by the violins, harps and flutes; their voices are scattered throughout the delicate orchestration.

Playfulness is prominent in “Mercury, The Winged Messenger,” where an ostinato cascades between different instruments to create a light-hearted atmosphere. Storgårds’ interpretation of “Jupiter, The Bringer of Jollity” is on the slow side – likely only slightly faster than Eugene Ormandy’s 1977 rendition with the Philadelphia Orchestra. Majestic and powerful, it is the earworm that perpetually encourages one to explore outer space, or in a sense, the realm of gods.

In “Saturn, The Bringer of Old Age” and “Uranus, The Magician,” it is as if one can hear time being compressed, warped and distorted, particularly with the metallic touches from the harps, brass and percussion. The ethereal women’s choir at the end of “Neptune, The Mystic” that concludes the suite – here sung offstage by the Elmer Iseler Singers – resembles a black hole devouring all of the instrumental power. I was left spellbound.

One interesting thing to note was the etiquette for clapping. After McCandless gave a sublime performance of the first movement, the audience was eager but somewhat hesitant to applaud (due to the conventional “no clapping between movements”) – and he gestured as if to say “go ahead.” Later, some excited audience members burst into applause between movements of The Planets, but were hissed at by some others who obviously considered it a faux-pas.

In researching this further, I found a riveting special report on applause by The New Yorker music critic Alex Ross. He made note of a conversation with pianist Emanuel Ax, where Ax said, “I think that if there were no ‘rules’ about when to applaud, we in the audience would have the right response almost always.”

I came away happily concluding that the TSO is attracting people with new ears, such that it continues to be a starship taking new passengers on unprecedented adventures. Classical music, to trained ears, is intriguingly about forms, concepts and styles, on the conscious level; subconsciously, to everyone, going to a concert is an inexpressible act of love. Norms and traditions are constantly changing – but from the intricate sections of folded time and place where music lies, one can always find moments to enjoy.

The Toronto Symphony Orchestra presented “Holst The Planets” from January 25 to 27, 2018 at Roy Thomson Hall, Toronto.

Wei Shen studied management and finance at the University of Toronto. Passionate about literature, classical music and visual arts, she is launching her career as a film director.