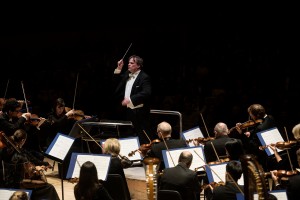 On the evening of January 25, I walked one lap around Roy Thomson Hall’s circular theatre lobby before ascending to my mezzanine seat, and felt the world starting to spin. Attending a performance of Gustav Holst’s The Planets by the Toronto Symphony Orchestra, I questioned whether the pieces on the program would work together – a composition by a 20th-century Russian-born composer, a new Canadian work, and a widely-known orchestral masterwork – but under the expert leadership of guest conductor John Storgårds, they did. Common dynamics and dispositions threaded together feelings of mystery and triumph, and recurring arpeggiated motifs created circular orbs of sound that seemed to spin themselves right out to space. Storgårds’ energizing style, and ability to draw out these common threads, made this one of the most exciting orchestral concerts I have ever seen.

The concert opened with the Canadian premiere of Igor Stravinsky’s recently rediscovered Funeral Song, which he wrote in honour of his deceased mentor, Russian composer Nikolai Rimsky-Korsakov. It was thought lost for years until musicologist Natalia Braginskaya and librarian Irina Sidorenko unearthed it in 2015 from the Rimsky-Korsakov State Conservatory archives in St. Petersburg. It began almost inaudibly, with rapid wavering notes from the basses that denoted a sense of tantalizing horror. Storgårds thrust his baton in the air, ordering the strings into stammering phrases. I originally anticipated a nostalgic mood for music in remembrance of the dead, but was surprised to experience an eerie tone that almost signified a fear of death – magnificent enough to reach beyond the piece’s 12-minute length.

There was a short transition on the stage before JUNO-nominated John Estacio’s Trumpet Concerto, featuring TSO Principal Trumpet Andrew McCandless as the soloist. The three movements took inspiration from Greek mythology – particularly Poseidon’s son Triton, whose conch shell was used as a trumpet to control the ocean waters.

The first movement, “Triton’s Trumpet,” reminded me of a coastline thunderstorm, with the trumpet and orchestra ruthlessly battling. The strings sounded like gusts of wind hitting cliffs, while the trumpet – the determined bird – dodged dynamic bursts of percussive lightning. At one point, McCandless put his trumpet mute in as if to indicate that he was finally being overcome, but this was short-lived. He played so frequently that he often wiped the condensation on his upper lip. After a climactic finish, the audience hesitated to clap, until he spoke up, saying: “It was really hard work!”

The following “Ballad” movement sounded, in contrast, like the morning after a storm, while the final “Rondo” movement had a quicker tempo and triumphant trumpet lines. With an abrupt ending to the concerto, McCandless hit a final note, as if a ribbon of hope was being pulled out of his horn. The act ended with a heartfelt embrace between him and Storgårds.

After the intermission, the hall was buzzing with excitement over the impending planetary phenomenon. Composed by Gustav Holst from 1914 to 1916, The Planets is his most popular work, with seven movements inspired by seven different planets.

The first – “Mars, The Bringer of War” – is believed to have a connection to the First World War with its cold resonance. The high-energy pace was dictated by the strings’ bouncing bows, with Storgårds literally jumping into phrases. This movement in particular shares similarities with Star Wars’ “Imperial March” – and in fact, Holst was a big inspiration for John Williams when composing for the film.

The second movement phased from night to day. “Venus, The Bringer of Peace” was calm and collected, while the harp delicately fluttered overtop smooth and quietly executed harmonies. This paved the way nicely for “Mercury, The Winged Messenger” – which, for the smallest and fastest-spinning planet, proved to be an act of swift call-and-response with a sudden finish.

The brass section came back in full force for the majestic “Jupiter, The Bringer of Jollity.” Here, their warm tones made me feel the safest I had felt all night. A gentle beast – the sound of the biggest planet – this movement was triumphant and celebratory, with playful tambourines reminiscent of happy movie music.

“Saturn, The Bringer of Old Age” was a bit of an odd movement. With two wavering notes that slowly repeated throughout, I was reminded of an ancient grandfather clock, ticking ever so slowly enough to lull me into a trance. Following this, the start of “Uranus, The Magician” was like an elephant parade entering the circus. Storgårds worked hard to keep up with the varying tempo, and began to look like a magician himself as he cast the cymbal crashes. At one point, the bass and cello players seemed almost to headbang in time, and I wanted to put up my devil horns – rock on!

The final movement – “Neptune, The Mystic,” inspired by the farthest known planet at the time – capitalized on the mysterious nature of space. The side stage door eerily opened to a wormhole of darkness. The phosphorescent tone and pace seemed to slowly create a glowing orb of light sparkling with magical dust. Coming from the darkness offstage were the voices of the Elmer Iseler Singers, who mesmerized patrons with haunting phrases until the door slowly shut and their voices diminished into near-silence.

The expertly curated program and Storgårds’ elaborate conducting style deserved the explosive standing ovation. It was a night that felt larger than life, and looking down at the full-size orchestra, the higher elevated seats proved to be the best place to hear the orchestra’s sound. I left the performance feeling as though I could take on the strength of any planet.

The Toronto Symphony Orchestra presented “Holst The Planets” from January 25 to 27, 2018 at Roy Thomson Hall, Toronto.

Arianna Benincasa has a lifelong passion for all things music and currently works at an audio post-production and recording studio. With a dedication to sharing her many concert experiences, she now is in pursuit of starting her own music blog. It is her goal to continually support the arts and culture communities in Toronto.