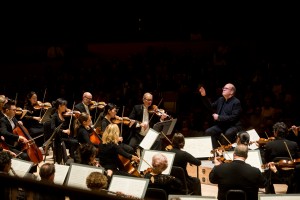 Entering the hall for the first night of the Mozart@262 Festival, I was struck by the sparseness of the stage. In contrast to the visual fullness of Handel’s Messiah just a few short weeks ago, with its rows of choir singers stacked onstage and the balcony behind the stage bursting with audience members, only 12 chairs, one stool, and a tufted leather piano bench for conductor Bernard Labadie – all black in a pleasing contrast to the pine-coloured stage – formed a perfect backdrop on January 10 for the rich tapestry of winds comprising Serenade No. 10 in B-flat Major.

The Toronto Symphony Orchestra opens Serenade No. 10 – known as Mozart’s “Gran Partita” – with a series of four, sustained notes in rhythmic unison, before splitting into layered, ascending tones. The two clarinets quickly emerge into the foreground of the music, setting the tone for a recurring motif in which they provide an articulate, agile phrase and the ensemble responds with a fuller variation. This back-and-forth provides a perfect vehicle to appreciate the basset horn, an instrument that reaches lower than the clarinet and adds a richer sound to sparser moments of the work. The piece feels particularly grounded for a wind ensemble, even as short, cheerful phrasing bubbles up through quickly ascending notes.

Both Serenade No. 10 and Symphony No. 39 in E-flat Major – the second work of the evening – were composed in the 1780s, during the latter part of Mozart’s career when he was effectively a freelance artist. The harmonie, a musical genre written for wind ensembles to be performed during dinner, became hugely popular during this time. Mozart took full advantage of this commercial opportunity to pen four serenades, including this intriguing, yet unobtrusive, Serenade No. 10.

Given that the harmonie originated in the dining room of Emperor Joseph II of Austria, Serenade No. 10 perpetually conjures the image of a dinner party. The shifts between movements are exactly as one would desire for a varied, yet refined, party soundscape. The adagio of the third movement, with the clarinets gliding gently over a pulsing pattern in the horns, eventually gives way to the fourth movement’s stronger melodies, executed in forceful unison. The mood lightens significantly for the fifth movement – at one point we are left with only quick, isolated pairs of notes in the clarinets – after which the tone takes a lower, darker turn; however, the soft, round gestures of conductor Bernard Labadie bring the ensemble quickly back to delicate, trill-laden phrases that highlight the agility of the orchestra’s performers.

As preparations are made for Symphony No. 39, the stage fills dramatically. Unchanged is the presence of a bench for Labadie, from which he conducts for the entire evening. While conducting seated may appear unusual, it is the new normal for Labadie following a diagnosis of stage four lymphoma in 2014 and subsequent treatments. He noted to the Montreal Gazette in 2016 that the rehabilitation process entailed “relearning my body, how I use my body to make music.” His upbeat and lively, though physically-economic, style provides a firm through-line to this evening’s program.

The slow opening of Symphony No. 39 is grand – perhaps even “on the pompous side,” as Don Anderson suggests in the program notes. This is the first in the final trio of Mozart’s symphonies, composed during the summer of 1788, which some scholars believe were written to be performed together as a single work. Although there is no known evidence of such a performance, simply the thought that Mozart created what are often considered his greatest symphonies over the span of a few months is undoubtedly a feat grand enough to warrant a fair bit of pompousness.

Throughout the symphony, the entire orchestra unites for strong allegros that begin in unison. There is an overwhelming sense of movement in the first forte note the musicians play together, and I frequently find myself lost in their synchronized, physical enactments of musical force. Body weights shift in unison. Limbs sway with grandeur. And Labadie demonstrates a tendency to lift one or both feet and literally step into that first bold note as his torso leans forward. This visual fullness, contrasting greatly with the performance of the serenade, mirrors the wider range of sound and clever dynamism of Symphony No. 39.

Continuity between the program choices is provided by the strong role of the clarinets, which take of the place of the usual oboes in the symphony orchestra. In the third movement of the symphony, there is a call-and-response feeling that mirrors the role of the clarinets within the structure of the serenade. In this movement of the symphony, extremely quick phrases in the winds are mimicked by the full orchestra; the pattern repeats itself, this time with a lead-in from the violins, before the entire orchestra responds with a bold, definitive response to the questions posed by its individual sections.

Presented under the overarching title “Majestic Mozart,” Serenade No. 10 and Symphony No. 39 are perfect introductions to a composer who tailored his brilliance to fit the conservative tastes of Vienna, while nonetheless inserting subtly subversive elements into his work. These tensions shine through early on in the symphony, with a short series of dissonant notes, and in the hands of the TSO, its conclusion leaves the audience with an abrupt final note that seems to hang in the air, suggesting that there is more to be said ­– appropriate for a composer who died so shortly after composing this work with masterpieces left to be written. A fate whose drama is certainly not lost on Labadie in the miraculous “second act” of his own life and musical career.

The Toronto Symphony Orchestra presented “Majestic Mozart” on January 10 and January 13, 2018 as part of the Mozart@262 festival at Roy Thomson Hall, Toronto.

Kallee Lins is an arts administrator, writer and researcher who has spent her life studying dance and theatre both in studios and in graduate university departments. She frequently contributes to The Dance Current.