One-woman show. A listening room. A melding of narration and sound-making. Personal and universal. A monologue but also very much a dialogue with the musical tradition. I’m seated at a picnic table in Leslie Grove Park with Toronto-based soprano Zorana Sadiq, trying to tease out what her new creation opening at Crow’s Theatre on November 9 is going to be like. 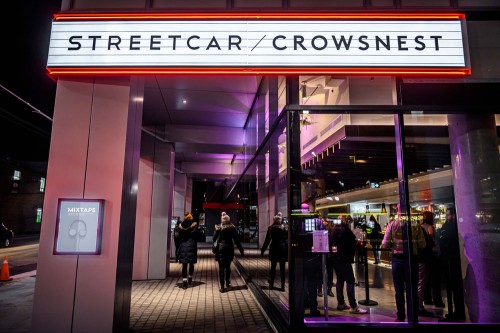 Before the pandemic, Toronto’s classical world was beginning to feature some beautifully crafted one-artist shows (Isaiah Bell, Teiya Kasahara) and the years ahead looked promising for this low-cost, high-creativity format. But then the pandemic stopped everything – and for far too long. And it’s no surprise that one of the very few live events in Toronto this autumn will be a one-performer play: Sadiq’s shape-shifting MixTape.

The one-singer play, directed by Crow’s artistic director Chris Abraham, is a result of Sadiq’s many years of music listening, making and teaching. The spark was, however, ignited at a musical event some seven years ago. “Back then, I did a concert of arrangements of my first musical loves, Kate Bush, Prince and Radiohead,” says Sadiq. The songs were arranged for classical soprano and a small chamber ensemble, Joe Macerollo on accordion, Peter Tiefenbach, piano and Timothy Francom, percussion. “Each song was transformed differently – sometimes they sounded like tango, other times like Glass. It was a lovely period working with those open-minded and creative musicians. They approached the pop music that I brought in as new works, which was perfect.”

The record of the July 28, 2014 performance at Holy Trinity Church concert series Music Mondays is available on YouTube: if you search Sadiq’s name, the video of their remarkable riff on Radiohead’s “High and Dry” will be easy to find.

Sadiq’s friend, director Nina Lee Aquino, came to the concert and told her that there was a show in there. At first she wasn’t sure. “But once all those things were out on the table – those early loves; my classical voice; what those artists showed me to do – I began to think how it all relates to who I am now and what I do as an artist,” Sadiq says. “I was curious about how art makes us. How it builds us. How the paths can be unusual.”

Sadiq has always been a fan of words and grew up in a book-reading household, her mother a writer. “I love to write but I never applied myself in this way. Once I decided to do it, it all came together. You realize your musical obsessions, you can trace them through all your roles, and through your teaching. I would often say to my students at Regent Park School of Music, listen how the melody is saying it too! Not just the words. And listen for what is there that is relevant to you. This kind of music is not some dusty thing in a museum; it’s you, it’s your thing.”

As the title suggests, Sadiq has crafted the piece in the format of a mixtape: DIY, democratic and low cost, and often containing widely different things. This live mixtape will have no instruments other than Sadiq’s voice in the mix, however. “The story goes through the prism of speaking and sound.” And the topics? “How music makes us. How humans are instruments. How we come out of the box with everything we need to express ourselves. All of us get filtered through language, pack up and condense those sounds that we’re making. And then some people train their voices, in a number of different styles, in my case classical. That’s a further attempt to cultivate this instrument that we all have. And I really do mean that we all have it. Some of us are more aware of that than others, and my hope is that audiences will become aware of their own ‘instrumentality’ in the course of the play.”

What does she love about Kate Bush, for example? Her eyes light up. “She has a very rangy, almost operatic sound. She’s unabashed about using that range, and this was the time when female popular sound was nothing like that. She’s also a wild storyteller,” she adds. “Her work was so programmatic. As a young person, if you wanted to jump into a make-believe world, she was your ticket.” Bush also came to prominence in the MTV era, when the video was an important component of music making, no? “Totally. She’s a polymath. She studied mime in Paris – what she could say without sound, which was interesting to me. She was a dancer. She used all that and synthesized it.”

What does Bush mean to you personally? I ask Sadiq. “She is… feminine power to me. Deeply, deeply feminine, in a conventional way at that time in the 1980s, but so powerful. That high voice… I love that: unapologetic power.” And there’s her storytelling, never obvious, always with a dash of mystery, combining the narrative with the poetic. “And then, I think, with sex to bepresented in music; when someone is bold and warm like that, it shows you a possibility, it gives you a little whoah, you say to your young self, OK, so that’s what a sexual identity is like. It could be like that. She modelled how to be a sexual woman.”

Mozart too makes an appearance in the play? “Pleasure comes up a lot in this show,” says Sadiq. “There’s so much pleasure in making classical sounds and the sort of a flight feeling when you are singing well. And although Mozart is extremely difficult and really tests the musician on all levels, it’s also the most delicious music – the earliest kind of success feeling for a singer. It’s a truly beautiful thing to sing and hear. As a child I actually first heard his clarinet concerto in A Major on the soundtrack in Out of Africa and adored it. I couldn’t get enough of it. And the first thing I sang as a 19-year-old was “Ridente la calma”, the Mozart Lied that everybody sings. And I thought, This is so lovely and so hard, but pleasure in execution is really high in Mozart. You can see the brilliance of how he wrote for the voice, how much he loved that instrument.”

Sadiq has also sung a lot of contemporary music in her career of a soprano, and that, she argues, is a wholly different experience. “When you sing Elliott Carter, for instance, another composer that I love, the pleasure is of a different sort. There is an intellectual pleasure going on there; there’s a sort of a rhythmic, animal pleasure going on as well.”

I ask her if any of the Mozart-Da Ponte heroines are included in her MixTape narration. “It’s rather the non-verbal component of music that I’m making the case for. I do very much investigate actual melody and sound, but characterization wasn’t that appealing to me for this show. This is a personal story of what I made of my life – through my ears.”

Is she a very literary singer? Sadiq confirms she is an avid reader. “I will asterisk passages in books and dog ear them, and go back multiple times – something will arrest me in the way somebody arranges words.” Like a lot of musicians, she seeks and finds the music of the sentence, the way words sound together, the rhythm of their jostling. “Sentences can lacerate me. I kind of collect them. Those crazy sentences that I write down when I find them, because they’re so evocative.”

She also reads poetry and enjoys lyrical fiction. “Anne Michaels’ Fugitive Pieces is one of my favourites of all time. And I love her poetry.” Plotting in novels, she can take or leave. “Plot is secondary for me. It’s all about how you say it.”

MixTape runs at Crow’s Theatre from November 9 to 28 at 8pm, with Sunday matinees at 2pm. Choose your own emergent comfort level: half the performances will be at 50% capacity, the other half at 100%.